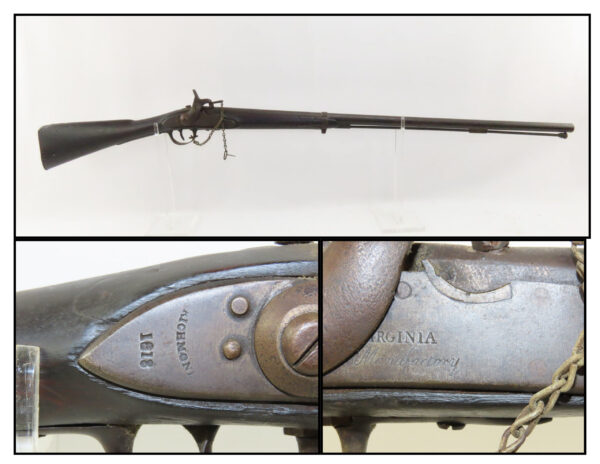 Richmond, VA Musket Made in the Only State Run Armory!

Here we present a Rare Antique Richmond Manufactory Civil War-time Conversion Musket, originally made in Richmond, Virginia circa 1818 and converted during the war circa 1863.

The year was 1798. America was still facing many uncertainties on all fronts. Naval conflicts from England and France were constant threats. The harassing of U.S. ships interrupted firearm supply routes that caused concern for the US federal government. There was a great need to supply the states with weapons for local militias.

With the supply being so low, many states attempted to import arms on their own through the open market in Europe. But this was expensive and shared the same risks. Some states relied on the slow-moving federal armories, and waited for what they could get, when they could get it. Virginia though, didn’t have time to wait for gifts from the federal government, they had a better idea in mind! After jumping through a few hoops, plans for the Virginia Manufactory of Arms had begun. Virginia was the only state to operate a local armory.

In 1802 the first state owned firearm factory began production under superintendent, John Clarke. The factory produced not only firearms, but swords and bayonets all the way up until 1821 when production ceased. By this time, many other sources of firearms were being more readily produced and the armory was no longer necessary. That and—according to Giles Cromwell—Virginia went through a period of stagnation due to economic factors in the state that lasted from about the time the Manufactory closed and when the Civil War began. When the Civil War began, records show that virtually none of the Virginia Manufactory muskets had been converted at all. From October 1, 1859 to November 1, 1861 over 44,000 Virginian long arms were issued from stores, all still in their original flintlock configuration. No other flintlocks are recorded as having been distributed after this last date, and Cromwell suggests that this was the beginning of a campaign to cycle these muskets back through for update and conversion to percussion.

This musket was modeled after the French Charleville as many early American muskets were. As you can see on this musket’s lock, the flash pan has been ground down, the frizzen and frizzen spring have been removed and the screws ground down flush with the face of the lock. Rather than a bolster being inserted from the side, this one utilized the “cone-type” conversion that sealed up the old flash hole and inserted a percussion nipple directly into the top-right of the barrel. A hammer replaced the flintlock cock, and you can still observe some of the tool marks from when the hammer was shaped to this gun. This sort of conversion has been surmised as having been performed by Whytheville gunsmithing firm John B. Barrett & Co. Further, a unique system was implemented on this piece whereby a pierced plug replaced the percussion nipple. Something like a matchhead may have been used as a primer and shaft would have been placed inside the pierced portion of the plug, the hammer hitting the shaft to ignite the primer and charge within. We have never before seen such a system!

These, like other Southern and Confederate arms of the war, were obsolescent weapons subject to extremely hard use such that few exist today. This one may look crudely adapted and worn because it is; but that makes it all the more amazing that it is yet available to be preserved as an artifact of the Civil War and the State of Virginia.

There was a short revival period of the factory during the Civil War, but in 1865 a fire destroyed the interior and it was never rebuilt. In recent years, a Federal Bank and a packaging company have completed construction over top of the Manufactory’s original site leaving no traces of the country’s earliest state-owned firearm factory. All we have left to remember this part of history by are a few public records and the products the factory produced. Luckily, we have one of those few muskets here!

This musket is absolutely fascinating and is a true rarity in the field of Civil War collecting and, specifically, Confederate Arms. The lock is dated “1818”. “VIRGINIA/MANUFACTORY” is stamped in front of the hammer on the lock. The number “22” is stamped on the side plate and on the bottom of the trigger plate. This is very likely a conversion number when this musket received its cone-type conversion as on other known examples.

The overall condition is good. The action remains strong. The bore is dark and dusty with age. An incredible opportunity!