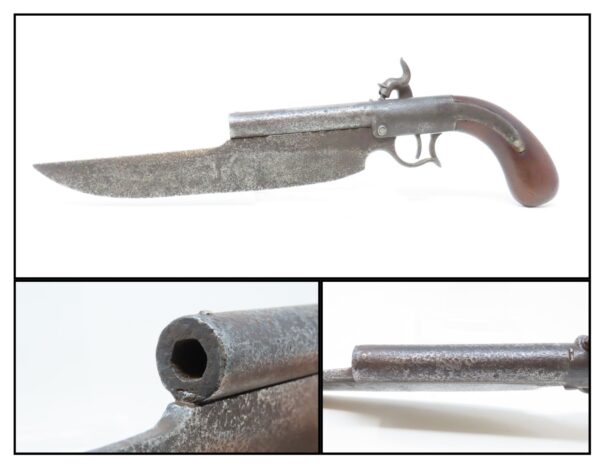 Here we present an antique Elgin Type Cutlass Pistol, made circa the mid-19th Century. In the aftermath following the infamous Battle of the Alamo (1836), men who died in that little mission in Texas were propelled from larger than life men into the pantheon of national heroes. In addition to Davey Crockett, James Bowie also found his life turned into legend in the public mind. Bowie initially became famous after his deadly “Sandbar Fight” (1827) in the middle of the Mississippi River, during which he was shot and stabbed repeatedly, before prevailing with his famous Bowie knife. The conflict began as a duel, during which the two primary duelists, Samuel L. Wells III and Dr. Thomas H. Maddox, each took two missing shots before shaking hands and ending their feud. Afterwards, a brawl broke out among each man’s supporters and Bowie was shot by Major Norris Wright, who was the Sheriff of Rapides Parish with who Bowie had an ongoing feud, bludgeoned with the empty single shot pistol and stabbed with a cane sword. With a boot on his chest and the sword still stuck in him, Bowie pulled the other man down and used his large knife to great effect. He was shot and stabbed again before the fight was completely over.

George Elgin, seizing on such sensational stories, developed and patented a single shot percussion pistol with an attaching blade. The blade was specifically designed in a Bowie fashion. The idea was that one would have a secondary weapon on their sidearm once their single shot was expended. The N.P. Ames Company, famous for their swords, made the blades for these pistols and both C.B. Allen and Morrill, Mosman and Blair made these pistols. Interestingly, despite a high profile name like the Ames Company and two other firms producing them, the overall number produced was very low and measured in hundreds. 150 were produced and purchased by the U.S. Navy. All others were sold on the public market.

This pistol has been there and done that. The metal surfaces have clearly seen the elements. The action does not function (the hammer does not presently stay in the cocked position). The bore is smooth and dark. The grip is an old replacement. Here is a fascinating gun inspired by the larger than life man who was James Bowie.