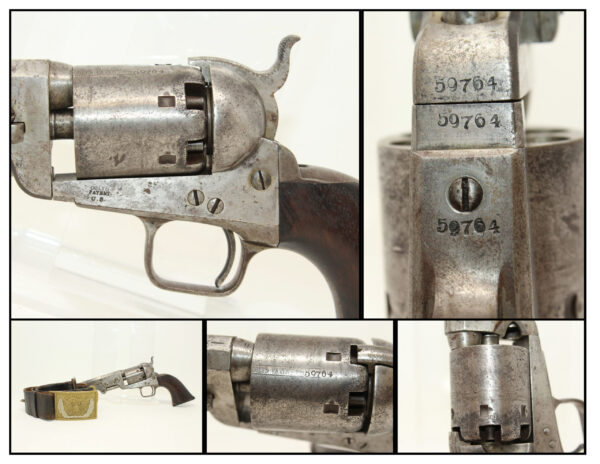 Here we present an antique Colt 1851 Navy Revolver, made in 1856 in Hartford, Connecticut. The 1851 Navy was one of Colt’s most famous and successful lines, reaching a production total of 257,348 from 1850 to 1873 (right up to the time of SAA production) from both Hartford and London factories. From Hartford alone, 185,000 were made by the end of the American Civil War. Many of these saw service during the conflict on both sides. There were some military purchases and lots of private purchases by soldiers going off to war. In addition, the Model 1851 was carried by Confederate General Robert E. Lee, and was a favorite of “Doc” Holliday and “Wild Bill” Hickok, who carried two of these most famously in his red sash.

This one was purchased and issued by the US Navy for use prior to and during the American Civil War. This revolver represents a very hard to find contract variant. It features an iron grip frame and is marked “USN” on the bottom of the grip frame and is “US” marked on the left side of the frame by the Colt’s patent marking. These revolvers were all roll engraved with a cylinder scene of the Battle of Campeche, from the Texan-Mexican War. It comes with an original uniform leather belt and buckle with a large federal eagle that was the pattern during the American Civil War.

The overall condition is very good. The iron parts are gray. The markings are clear. The numbers match. The walnut grips saw lots of use and have been smoothed down and are still functional grips. The bore is in very good condition with strong rifling. The action remains excellent, strop and crisp. The belt is in near fine condition. This is a fantastic set of Civil War period collectables and each is scarce on its own, but here they are together for your conservation and collection!