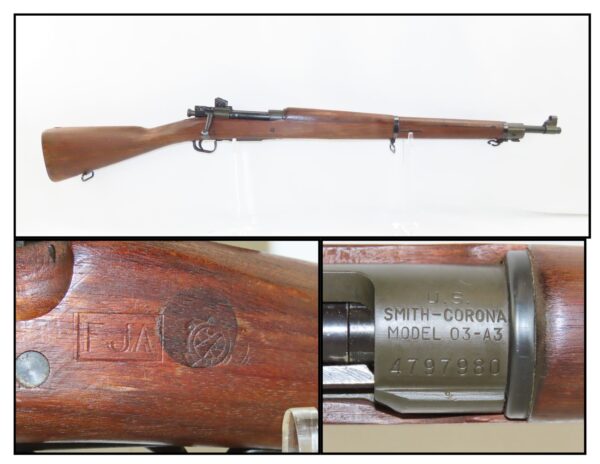 Here we present a U.S. Smith-Corona Model 1903A3 Bolt Action Infantry Rifle, made circa 1944 at the Springfield Arsenal. This rifle had a production run from 1903 through 1949 with over 3,000,000 produced. Early during World War II, Smith-Corona shifted away from making typewriters to producing Model 1903A3 Springfield Rifles with the assistance from Remington Arms and High Standard Manufacturing Company. Smith-Corona produced a total of 234,580 rifles during the course of the war.

The M1903 Springfield, formally the United States Rifle, is an American five-round magazine fed, bolt-action service repeating rifle, used primarily during the first half of the 20th century. It was officially adopted as a United States military bolt-action rifle on June 19, 1903, and saw service in World War I. It was officially replaced as the standard infantry rifle by the faster-firing semi-automatic eight-round M1 Garand starting in 1936. However, the M1903 Springfield remained in service as a standard issue infantry rifle during World War II since the U.S. entered the war without sufficient M1 rifles to arm all troops. It also remained in service as a sniper rifle from 1936 through 1975, which included World War II, the Korean War, and even in the Vietnam War. It still remains popular as a civilian firearm, historical collector’s piece, a competitive shooting rifle, and as a military drill rifle.

The overall condition is near fine! The action is strong and tight with a smooth bolt pull. The bore is bright. This example sports a solid stock with a circle “P” stock to the rear of the trigger guard. “FJA” and crossed cannons are stamped on the left stock. The barrel is dated “10-43” underneath “SC” over a flaming bomb. Here is a great piece of WWII history for the collection.