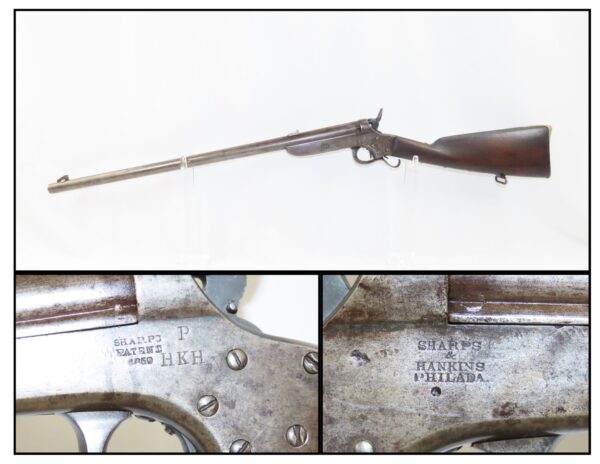 US NAVY Antique CIVIL WAR SHARPS & HANKINS Model 1862 Carbine “P/HKH” Insp One of 6,686 Purchased by the Navy During the Civil War

One of 6,686 Purchased by the Navy During the Civil War

Here we present an antique Sharps & Hankins Model 1862 Navy Carbine. Made from 1862-65, the total production of the Navy Carbine was only 6,686, making this quite a scarce representative of a Civil War long arm. These carbines are believed to have seen extensive service aboard various vessels during the American Civil War. Being that they were intended for use on the water, the Navy carbine was factory fitted with a very tight leather cover to prevent corrosion on the barrel, most of which have long disintegrated.

The shape of the carbine is distinctly Sharps (much like their pepperboxes) and operates a bit differently than other carbines of the era. The trigger guard doubles as a lever, which is opened by pressing a small tab inside the smaller loop of the lever. Opening the lever slides the barrel away from the recoil shield for loading and unloading. Great elevating rear sight and brass butt-plate. The leather jacket has long since been removed. This carbine was inspected by Henry K Hoff, who was a United States Navy officer and ordnance inspector in Philadelphia from 1862 through 1867. Hoff was promoted to rear admiral on April 13th, 1867 and commanded the North Atlantic Squadron from October 1867 to October 1869.

The overall condition is good. Robust, smooth action. Semi-bright bore. The walnut stock is solid throughout with minimal wear. The markings are clear. “SHARPS PATENT/1859” is on the left receiver. “SHARPS & HANKINS/PHILADA” is on the right side of the receiver. “P/HKH” marked on the left frame. Replacement front and rear sights.