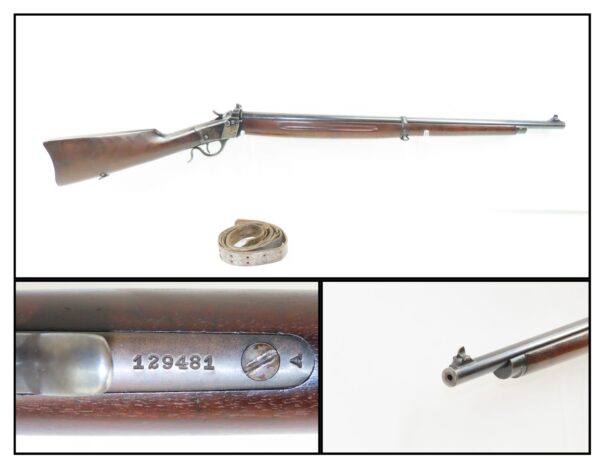 Here we present a Winchester 1885 Low Wall “Winder” Musket, chambered in .22 Rimfire Short, made circa 1918 in New Haven, Connecticut. Ironically, this was Winchester’s first single shot rifle, the company having been founded on its winning lever action repeater design. John Moses Browning, the famed gun designer who forever changed the firearms landscape, began his career with this rifle in the 19th Century before dominating the world scene in the 20th Century.

This example is one variant known as the “Winder Musket”, which was heavily influenced by Colonel C. B. Winder for use as a training rifle for troops. The idea was that it be a full-sized rifle chambered in .22 Rimfire Short so that the trainee would get the weight and feel of a rifle of heavier caliber and the recoil and thrift of .22 Rimfire. This rifle was one of only about 11,000 to be purchased by the U.S. Ordnance Department from 1918-1919. It was replaced shortly by bolt action .22s, as the bolt action was the action of the day. The rear sight is the original Lyman.