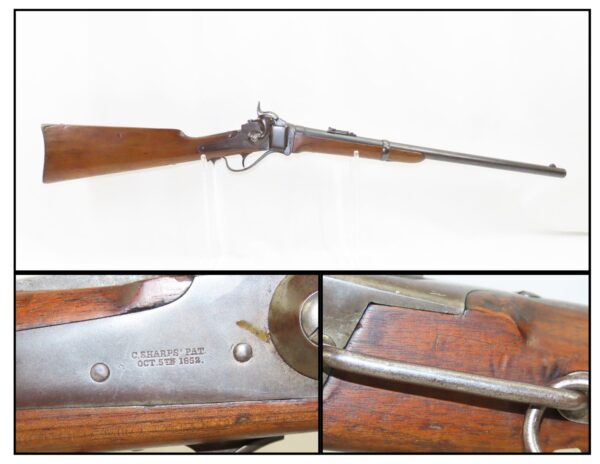 Issued to Private James McMickle in 1863

Here we present an antique Sharps New Model 1863 Carbine, made circa 1863. This carbine has been identified by serial number in the book Civil War Sharps Carbines & Rifles by Early J. Coates & John D. McAulay. It was issued to Private James McMickle of I Company of the Thirteenth NY Cavalry when the unit was formed circa June 1863 through the end of that year. James was a 34-year-old from New York’s 8th District when he enlisted in 10 December of 1863. He was promoted to Corporal 4 June 1864 (Annual Report of the Adjutant-General of the State of New York for the Year 1894 Volume IV: Registers of the 13th…Regiments of Cavalry, N.Y. Vols., in War of the Rebellion.). Summary of duty for the 13th from the National Parks Service:

This carbine was converted to 50-70 Govt circa 1867 for use in the West by the federal government in the post-Civil War period. Over 100,000 Sharps rifles and carbines were purchased and used by the federal government during the American Civil War. In 1867, the Ordnance Department contracted with the Sharps Rifle Company for conversion of over 31,000 Sharps percussion carbines to the .50-70 breech loading configuration. These carbines were issued to the regular cavalry regiments on the western frontier and remained in service until they were replaced by the Springfield Model 1873 Carbine.

The overall condition is very good. Nice, older re-blued finish. Robust action. Shiny bright, sharply rifled bore. This example sports a solid walnut stock despite some chipping to the right side of the receiver tang and the short, stable crack off the left side at the front of the comb. A clear “DFC” Ordnance inspector cartouche is clear in the middle of the left side of the butt stock while the cartouche from the original manufacture of the carbine is a bit faint around the sling ring bar. A very nice piece of history with use in both the Civil War and during the Indian Wars!