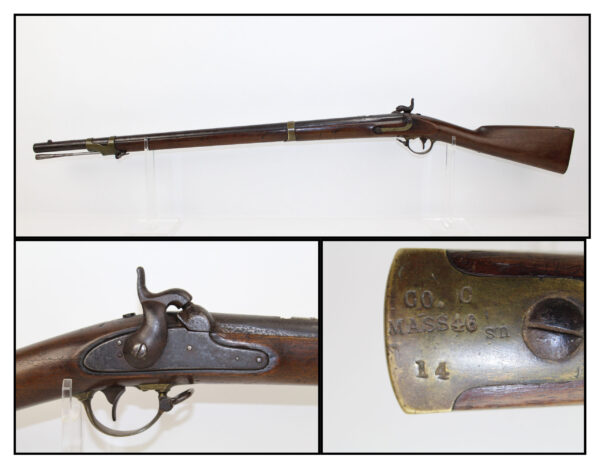 Here we present an antique U.S. Model 1841 “Mississippi” Rifle-Musket, made on contract by Robbins, Kendall & Lawrence of Windsor, Vermont, in 1847. Only 10,000 were made by the company (as compared to a total combined production of about 70,000), and it is the only contract work they are known to have done. The Mississippi Rifle is so called because its service life included the Mexican-American War, during which Jefferson Davis (future president of the Confederacy) led his Mississippi troops, who carried and favored the rifle. It was a rugged and reliable weapon used all the way through the American Civil War. The large brass patchbox distinguishes this model from its contemporaries. Now as then, it is still a very handsome military arm.

This example is unit marked to the 46th Massachusetts Volunteers, Company C. Rifle 14. The tang of the butt plate is marked “CO.C/MASS46/14”. The 46th Mass was organized in Springfield in October 1862. Battle Unit Details and Company C’s roster can be seen in the gallery. The lock is marked “Robbins,/Kendall &/Lawrence/U.S.” and “WINDSOR VT./1847”. Two faint inspector cartouches remain on the left side of the stock. This rifle was made during the Mexican-American War and re-issued to this militia group during the American Civil War.

The overall condition is good. Traces of the original finish remain with a dark patina throughout. The markings are legible. The stock is in good shape. The bore is dark. The action on this rifle is excellent.