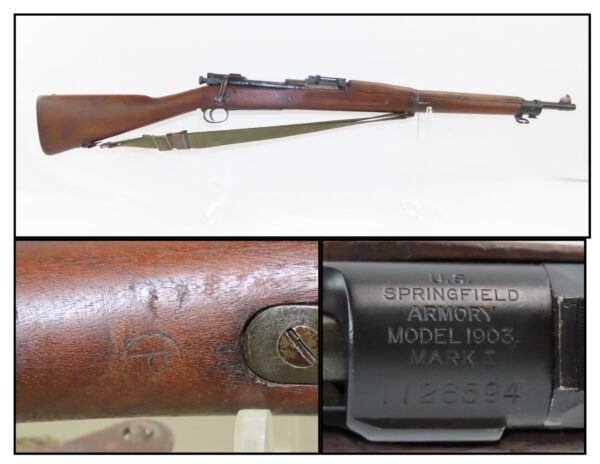 Infantry Rifle Made in 1919 with PEDERSEN DEVICE!

Here we present a C&R U.S. Springfield Model 1903 Mark I Bolt Action Infantry Rifle, made in 1919 at the Springfield Arsenal with the Mark I modification being referred to as the Pedersen Device. During World War I, the United States secretly developed the Pedersen device attachment for the M1903 Springfield rifle that allowed it to fire a .30 caliber (7.62 mm) pistol type cartridge in semi-automatic mode. This attachment was developed to allow an infantryman to convert their rifle to a form of submachine gun or automatic rifle in approximately 15 seconds. Production of the Pedersen device and modified M1903 rifles started during 1918. However, the war ended before they were sent to Europe. The contract was cancelled on March 1, 1919, after production of 65,000 devices, 1.6 million magazines, 65 million cartridges and 101,775 modified Springfield rifles.

This Model 1903 rifle had a production run from 1903 through 1949 with over 3,000,000 produced. The M1903 Springfield, formally the United States Rifle, is an American five-round magazine fed, bolt-action service repeating rifle, used primarily during the first half of the 20th century. It was officially adopted as a United States military bolt-action rifle on June 19, 1903, and saw service in World War I. It was officially replaced as the standard infantry rifle by the faster-firing semi-automatic eight-round M1 Garand starting in 1936. However, the M1903 Springfield remained in service as a standard issue infantry rifle during World War II since the U.S. entered the war without sufficient M1 rifles to arm all troops. It also remained in service as a sniper rifle from 1936 through 1975, which included World War II, the Korean War, and even in the Vietnam War. It still remains popular as a civilian firearm, historical collector’s piece, a competitive shooting rifle, and as a military drill rifle.

The overall condition is very good. The action is robust all around. The bore is bright and in good shape with strong rifling. All marks are clear and legible. “HP” is hand carved on the left butt stock. This example includes the canvas sling. Here is a fantastic piece of history to collect and display!