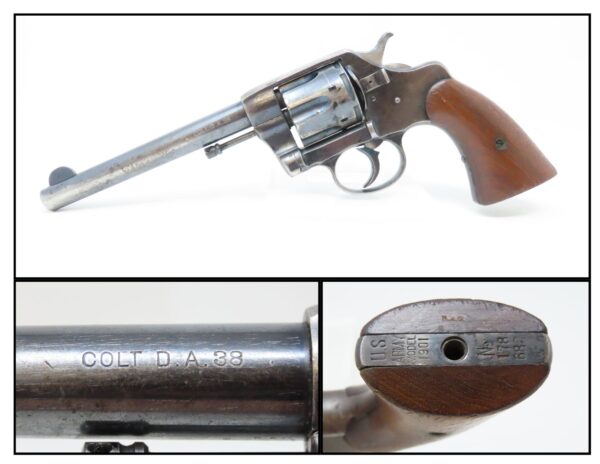 Here we present a C&R U.S. Colt Model 1901 U.S. Army Double Action Revolver, made in 1901 by the Colt Manufacturing Company in Hartford, Connecticut. This is one of the many upgrades of the Colt Model 1892 series of U.S. Army revolvers with a production run from 1892 through 1907.

Learning all the different models of New Army & Navy DA Revolvers Colt introduced from 1892 up to 1907 can be quite confusing. The M1892 Colt Army and Navy was the first general issue double action revolver with a swing out cylinder used by the US military. In 1892 the gun was adopted by the Army in .38 Long Colt caliber, and the revolver was given the name of New Army and Navy. Initial experience with the gun caused officials to request some improvements. This would be an ongoing condition, resulting in Models 1892, 1894, 1895, 1896, 1901, and 1903.

These revolvers are more famous for their perceived shortcomings than for their success. They were widely disparaged for not having enough stopping power in combat during the Moro Rebellion in the Philippines.  Nevertheless, they were probably more potent than most of the military handguns of the period and they were still in active service along with the larger .45 caliber handguns through at least the end of World War I. By the time production ceased in 1907 (the gun would be kept in the government inventory for several years after that) more than a quarter of a million versions of the Army & Navy had been made. Not a bad track record for an arm that many consider something of a failure.

The overall condition is near fine. Strong action. The bore is bright with nice rifling. Solid walnut grips. “RAC” markings on the left frame and cylinder, Visible numbers match and the markings are sharp. The lanyard ring is absent. A nice military issue Colt from the early-20th Century!