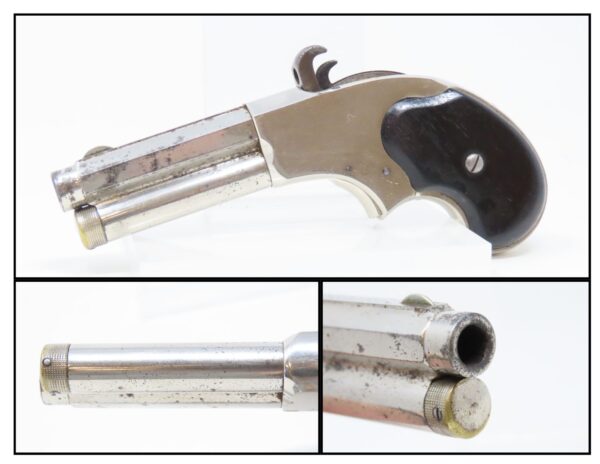 Here we present an antique Remington-Rider Magazine Pistol. This pistol was manufactured circa 1878 based on designs by Joseph Rider. This pistol is a 5-shot repeater chambered for the .32 extra-short rimfire cartridge. It uses a tube magazine under the barrel and a simple but clever vertically shifting breechblock to give an impressive amount of firepower in a small package. Fewer than 15,000 of these were made between the production run of 1871 and 1888 and they represent one of the few American uses of a tube magazine in a handgun.

The design was clearly influenced by the popular Winchester rifles of the period and their predecessors. The Riders are among the earliest magazine fed pistols. The pistol takes up basically the same amount of pocket space as Remington’s famous double derringer but allowed for five shots instead of two. The action is unique in and of itself. The large spur brings another cartridge from the magazine while simultaneously cocking the single action hammer. The large spur travels forward again to close the breech and has an aperture that acts as the rear sight. Very neat!

The overall condition is fine. Original nickel finish. Strong action. Nice bore: reflective with good rifling. Both grips are firm with average wear. Here is a great example of a scarce Remington!