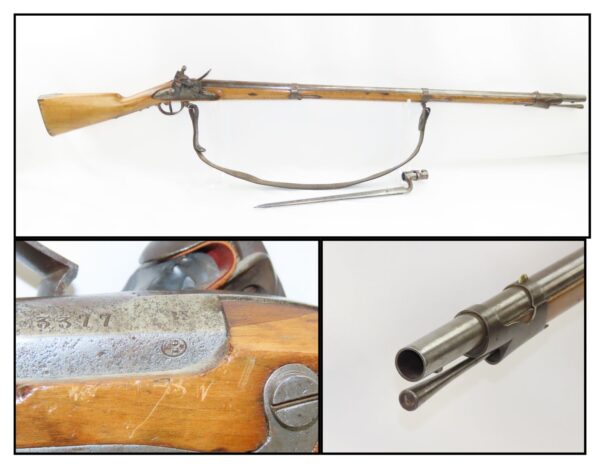 Here we present an antique Swiss Flintlock Charleville 1777 Military Musket, manufactured circa the early to mid-1800s likely in Liege, Belgium. This .69 caliber musket is very similar to the French Charleville Model 1777 in both barrel length and caliber. The barrel has several hallmarks and stamps attributing to its Belgian craftsmanship. The Charleville musket was a .69 caliber standard French infantry musket used in the 18th and 19th centuries. It was made in 1717 and was last produced during the 1840s. However, it still saw limited use in conflicts through the mid-19th century.

The overall condition is very good. This example includes a socket bayonet and sling, all in good shape. The action is strong, it will spark, and the bore is in good shape. The numbers match. The stock has a repaired cut under the middle barrel band. An “F” in a shield can be seen at the breech, the Swiss cantonal marking, and “BF” markings are engraved on the lock, the mark of the maker of the musket. This is a great example of a scarce musket!