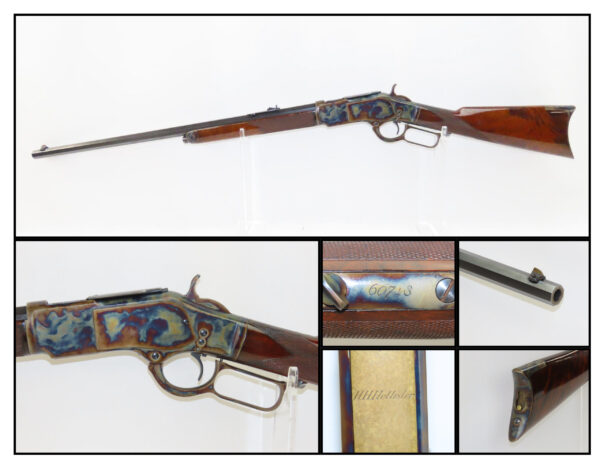 Here we present an antique Special-Order Winchester 1873 Lever Action Rifle in .44-40 WCF, received in the warehouse on 8 September 1880 in New Haven, Connecticut, per the Cody Firearms Museum Letter. The letter goes on to confirm this rifle’s set of features and current configuration of the checkered stock, half-length magazine tube, “light” weight, and case-hardened finish on the receiver. The walnut stock is highly figured and stunning.

There is a name inscribed on the bottom of the lifter: “H.H.Hollister”. It is too bad the letter does not say to whom this was shipped (most do not, in our experience), and there is more than one possibility as to the identity of the owner. However, there was a prominent banker and railroad man in New York, Henry Hutchinson Hollister (1842-1909), that went by this abbreviated name as a rule. The Commercial and Financial Chronicle from June of 1880 advertises his company as “H.H. Hollister & Co., Bankers and Brokers, New York and Baltimore. In New York his offices were listed at 43 New St. and in Baltimore 21 South St. He was listed in Poor’s Manual of Railroads as being on the board of directors for the Chicago and Eastern Illinois RR. Co. in 1887. In response to the Panic of 1901, the NYSE’s first stock market crash (precipitated by a struggle to control the Northern Pacific Railroad), Hollister commented, “The Street feels that there is a battle of giants for the Northern Pacific, and that if either side got it the Burlington deal would be jeopardized. That is the reason for the nervousness. At the same time today there was a kind of bargain counter here for people who had the money to avail themselves of a good opportunity.”

The overall condition is very fine. This rifle has been excellently refinished with virtually complete blue finish on the barrel and case-colors on the receiver. The action is crisp. The bore is bright and mirror-like. All markings are sharp. The grain of the stock is This rifle is everything you would want, case colored receiver, fine wood, the letter, a bit of mystery, and Winchester quality!