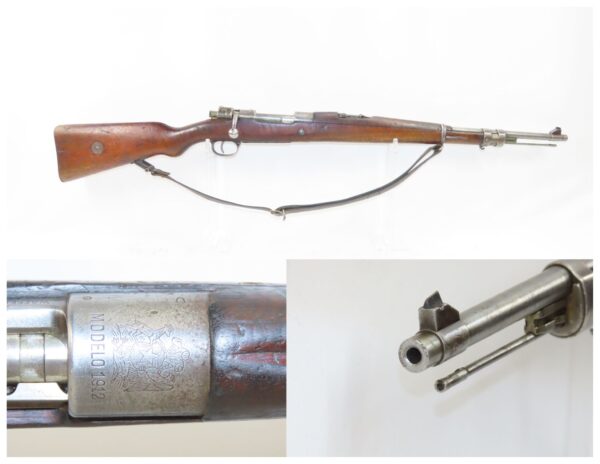 Here we present a C&R Steyr Model 1912 Chilean Contract Short Rifle, made circa the World War I era in Steyr, Austria. Prior to the Model 1912 contract, the Mauser 1895 was Chile’s weapon of choice. However, by 1911 the “cock on closing” Model 1895 was starting to appear a little outdated and Chili wanted a new rifle. The military of the Republic of Chile has always had a bit of Prussian slant. Even to this day, their parade uniforms include Stahlhelms and their parade rifles are Mauser 98 and 95 rifles with uniforms that are often identical to the German Army.

For them, the choice was simple. Adopt what the Germans have, which was the famous Model 1898 Mauser. And the rifle that Chile adopted was essentially the same as the Model 1898 with just a few changes. It was named the Modelo 1912. The biggest change was that the Modelo 1912 was made by Waffenfabrik Steyr in Austria instead of by DMW/Mauser Oberndorf of Germany. Additionally, the same rifle that Chile ordered was also sold to Columbia, Mexico, Ecuador, and even China bought a few. Very wisely, Chile retained the 7x57mm cartridge, but more importantly, Chile had large stocks of the cartridge and would save money by keeping it.

This example has the Chilean crest on the receiver and includes a bayonet, scabbard, and leather sling.

The overall condition is good. Strong action. Bright, nicely rifled bore. Solid stock with average wear. Legible markings. Numbers on the bolt do not match. The leather sling is in good shape.