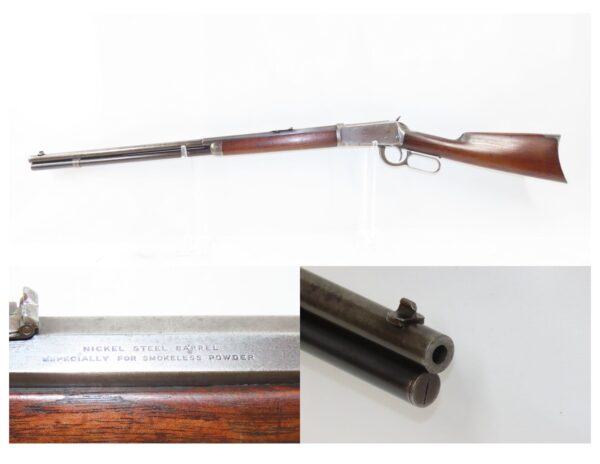 Here we present a C&R Winchester Model 1894 Lever Action Rifle, made in 1905 in New Haven, Connecticut. The credit for the design of such a prolific firearm again lies with John Moses Browning, who lent his extensive design talents to a large number of weapon types throughout his career. The Model 1894 was the first Winchester rifle made for use with the new technology of smokeless powder and was developed as a hunting rifle. Over 7.5 million were produced from 1894 until 2006. While various cartridges were supported throughout the run of the gun, the .30-30 Winchester became its staple. In practical use, the Model 1894 became a favorite for general shooters and hunters alike. To this day, it remains a deer hunting favorite, and, in all likelihood, more deer have been taken with the 1894 than any other.

In April 1919, Winchester eliminated the “18” and “19” from the model names of all of the various models that were in active production. So, prior to this date, the Model 94 would have been the Model 1894. Somewhere around 1946, Winchester, at the other gunmakers persistence, bowed to them and renamed the cartridge to .30-30, rather than the .30 WCF (Winchester Center Fire), obviously because the other makers didn’t like the Winchester name in the cartridge their rifles were firing, along with Winchester worrying they would miss out due to everyone else calling it a .30-30.

The overall condition is very good. Original blue finish/patina. The action is excellent. The bore is in good condition. The rifling is a bit worn but still serviceable. The stock is smooth and solid. The rear sight is the multi-leaf type and the middle leaf is chipped on one side. The front sight has been replaced long ago. The tang looks like it once held a rear peep sight. A nice Winchester with a desirable barrel profile!