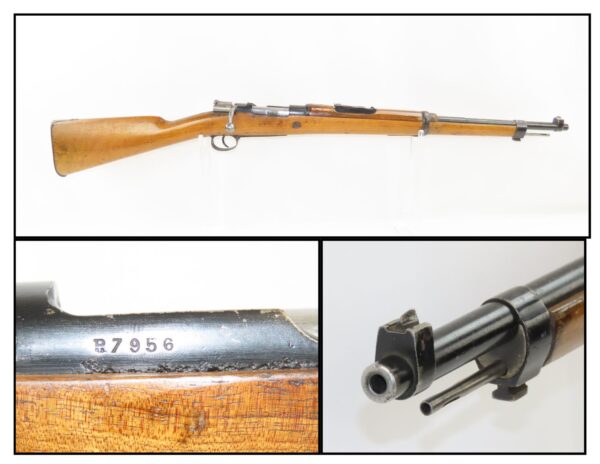 Military Rifle for the SPANISH ARMY!

Here we present a Spanish Mauser Model 1916 Short Rifle manufactured at either Fábrica de Armas or Industrias de Guerra de Cataluna. The Model 1916 rifle was adopted on November 14, 1916 to replace the M1895 carbine. The short barrels, though, were not optimized to take advantage of the higher velocity of the M1913 cartridge. Like the M1913, the left rear of the receiver was cut to facilitate stripper clip loading, though it was cut fully flush with the stock. Gas escape holes were added to the bolt and to the receiver to vent excess gas in the event of a case failure. Also, like the M1913, the M1916 rifle had a bent bolt handle, a full-length stock with a lug for an M1913 sword bayonet. These rifles featured a 21.75-inch barrel, though a carbine version was also manufactured with a 17.7-inch barrel, though this may have been an experimental version. The M1916 was manufactured by Fábrica de Armas from 1916 to 1951 and Industrias de Guerra de Cataluna from 1936 to 1939. Starting in 1943, many of the M1916 rifles were converted to fire the larger and more powerful 7.92×57mm Mauser cartridge, which Spain had adopted that year with the M43 rifle.

The overall condition is very good. Finished in black. The action is strong and tight. The bore is bright throughout. This example sports a solid stock. “7956” can be read on the left side of the receiver with a worn and differing number on the bolt.