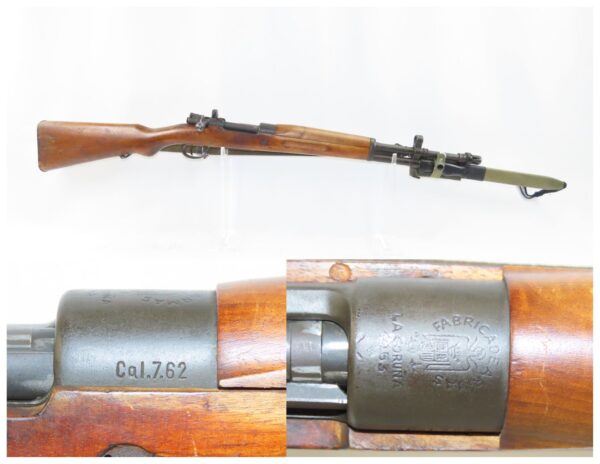 With SLING, BAYONET, SCABBARD and FROG

Here we present a C&R Spanish Model 43 FR8 Mauser Rifle manufactured in 1953. In 1943 Spain adopted the Mauser 98 rifle as standard for its military, designated the M43. The Spanish M43 Short Rifle was produced at Fabrica DeArmas, the Spanish Government Arms Factory in La Coruna, Spain. It is based on the German K98 Mauser and is chambered in 7.92mm (8mm) Mauser. The M43 was produced in La Coruna until 1957. It was a variant of the Karabiner 98 with a straight bolt handle, a front sight guard, and a handle groove in the front stock.

When Spain began switching over to the CETME Model 58 Automatic Rifle, which was produced by the Spanish armaments manufacturer Centro de Estudios Técnicos de Materiales Especiales, many M43s, as is this one, were converted to FR8 rifles for military training purposed and Guardia Civil Service. The “FR” stands for Fusil Reformado in Spanish (“Converted Rifle” in English). The FR7 is a variant of the “Spanish M93 Mauser” bolt action while the FR8 is based on the “Mauser System 98” bolt action. Due to their light weight, short barrel and the caliber used, their recoil and muzzle blast are relatively heavy.

As mentioned above, the FR8 was developed from the Model 1943 short rifle, which was based on “large ring” Model 1898 Mauser action. Both the FR7 and FR8 rifles were modified to fire 7.62×51mm NATO. The FR8 was used well into the 1970s by mounted Guardia Civil units in the Sierra Nevada.