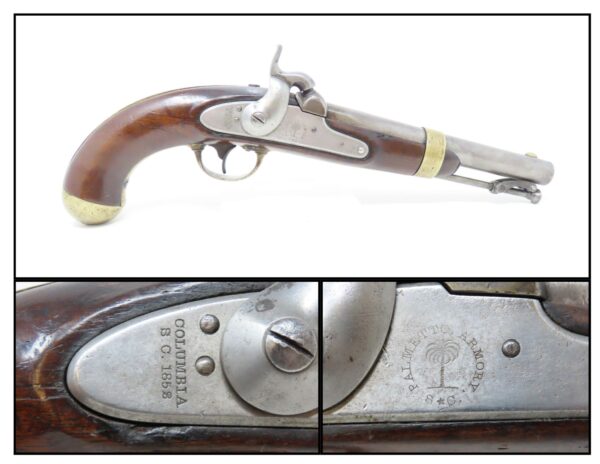 Here we present an antique Palmetto Armory Model 1842 Percussion Pistol manufactured circa 1852-53 in Columbia, South Carolina for the South Carolina Militia. This example is marked “PALMETTO ARMORY” in an arch over a Palmetto palm tree, and the typical “S*C” clearly marked on the center of the lock, “COLUMBIA/S.C. 1852” on the tail of the lock, “1853” on the tang, a very clear “V” over a palmetto on the upper left side of the barrel at the breech, and “Wm. GLAZE & CO.” on the left barrel flat. It has a blade front sight and a swivel ramrod.

It is believed that William Glaze did not actually manufacture these pistols but instead had them assembled and finished using parts from Northern contractors who manufactured Model 1842 pistols on contract with the U.S. Government. Glaze’s partner, Benjamin Flagg, was formerly the superintendent of Asa Waters factory in Massachusetts. Waters had formerly manufactured the Model 1836 flintlock pistols and transitional style early percussion pistols upon which these percussion pistols are based. These pistols are all assumed to have seen hard and heavy Confederate use in the Civil War and many were destroyed.

The 1842 features sturdy construction with lots of brass for support. This was important during a time when one would expend their shots and still have a fight on their hands. Striking your opponent with the pommel of your gun was quite effective. The ramrod is captive, so that it would not be lost in the heat of battle on top of a horse.

The overall condition is very good. Excellent action. Great bore. Solid, smooth walnut stock. “IHE” was scratched into the left side of the stock long ago. A superior example of a rare Southern pistol!