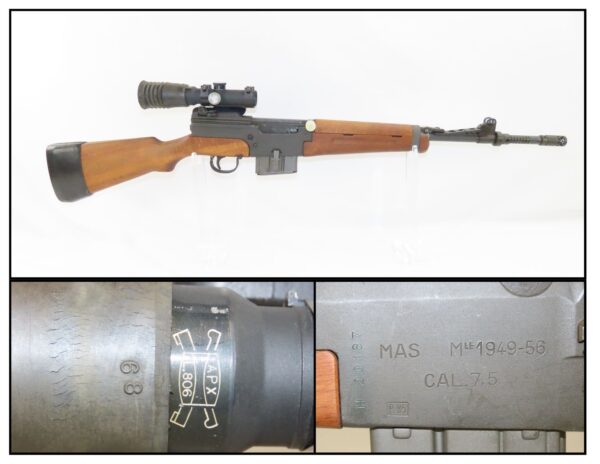 “Pride of the French Foreign Legion”

Here we present a French MAS Model 49-56 Semi-Automatic Rifle with the APX L806 sniper scope, manufactured circa 1960 at the Manufacture d’Armes de Saint-Étienne, often abbreviated to MAS (“Saint-Étienne Weapons Factory” in English). It was a French state-owned weapons manufacturer in the town of Saint-Étienne, Loire founded in 1764.

This improved version of the original French MAS 49 called the MAS-49/56 was introduced in 1957 and incorporated lessons learned from service in Algeria, Indochina, and the Suez Crisis. The rifle was shortened and lightened to improve mobility for mechanized and airborne troops. These rifles saw service for years in theaters of combat all over the world and were known as the “Pride of the French Foreign Legion”. The MAS-49/56 was completely withdrawn from official service in 1990 but is still prized by guerrilla forces in many third world countries to this day due to its rugged durability. Total production of these rifles was 275,240 issued between 1957 and 1978.

The overall condition is fine. The action is strong all around. The bore is bright. Smooth and solid stock. Includes an original French APX L806 scope! A wonderful French military rifle!