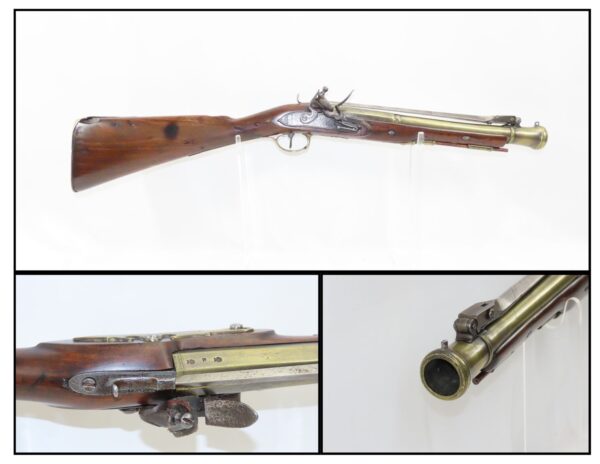 Here we present an antique British Brass Barrel Flintlock Blunderbuss with a Snap Bayonet, made circa the early 1800s in London, England. The blunderbuss is a firearm with a short, large caliber barrel. They are flared at the muzzle, frequently throughout the entire bore, and used with shot and other projectiles. The blunderbuss is commonly considered to be an early predecessor of the modern day shotgun, with similar military and defensive use. It was effective only at short range, lacking accuracy at long range. A blunderbuss in handgun form was called a Dragon, and it is from this that the term “Dragoon” evolved.

The overall condition is good. The brass parts remain smooth, while the iron lock and barrel tang are a bit pitted. Birmingham proofs on the barrel along with the letter “R”. The stock has been repaired throughout, especially around the wrist, then refinished. The action remains strong and still gives a spark. The bore is smooth and in good condition. A very neat piece of firearms history from early-19th Century England!