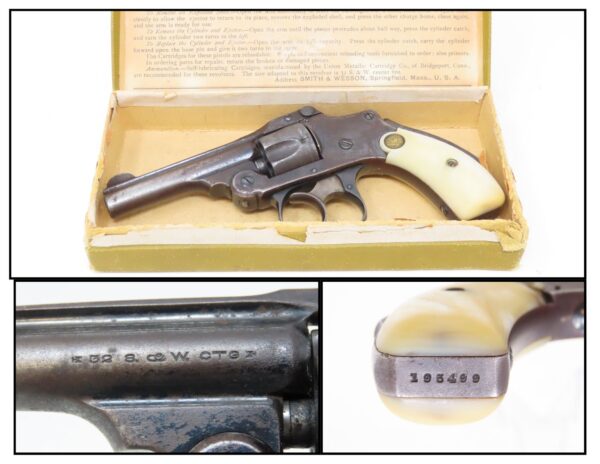 Here we present a 3rd Model Smith & Wesson .32 Caliber Safety Hammerless Revolver, made between 1909 and 1937 in Springfield, Massachusetts with a serial number range of 170000 through 242981. The Smith & Wesson Safety Hammerless models were produced from 1887 (1888 for the 32) to just before World War II. They were chambered in either .32 S&W with a six shot cylinder or .38 S&W with a five-shot cylinder. They were most often produced with a 2-inch, 3-inch, or 3.5-inch barrel. But some 6″ barreled versions are known to exist. This revolver was made to be a simple, compact and reliable firearm that one could carry in a pocket or a holster around the turn of the 20th Century. This revolver features an internal hammer design to remove risk of snagging or stopping the action. There is a grip safety built into the back of the grip frame. The frame is a top-break design that activates the automatic ejector.  These are very nice features from the turn of the 20th Century! They were known as “The New Departure” to reflect the company’s new approach to designing revolvers.

This example includes an original factory box for the correct caliber and model, though it originally contained a nickel version.

The overall condition is good. Original blue finish and factory mother of pearl grips with the S&W medallions. The action is strong as far as being able to pull the trigger and hear the hammer drop internally, however, the cylinder indexing is intermittent. The bore is in very good condition with nice rifling. The grips are in good condition with just a chip at the top of the right panel. This is a handsome little revolver that would be a nice representative example or maybe even one to fix up and make operational again!