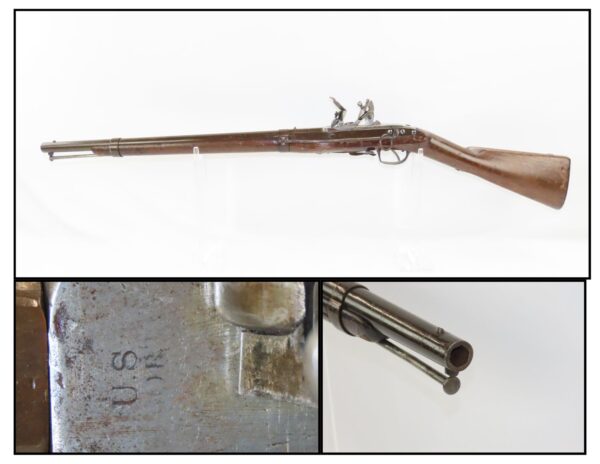 Here we present an antique U.S. Model 1840 Type II “Fish Tail” Side Lever Hall Breech Loading Carbine from the Simeon North Contract, made circa 1842 in Middletown, Connecticut. This carbine would have been manufactured as a percussion carbine in the early 1840s and converted to flintlock sometime thereafter. A native of Berlin, Connecticut, Simeon North was one of the most influential arms makers of the early republic beginning with manufacturing the first U.S. martial pistols in 1799 (the North-& Cheney Model 1799s) and finally ending with the Model 1843 Hall carbines right up to his death in 1852. He was influential in developing the first milling machines and also helped establish truly interchangeable parts on U.S. martial arms. He manufactured 6,501 of these Model 1840 Hall carbines in 1840 through 1843. 6,001 of them including this one was the standard Type II with the distinctive “fishtail” shaped breech lever. The vast majority of these were smoothbore, and some were later bored out to larger calibers and rifled. The example however remains .52 caliber.

The overall condition is good. The action is strong. The bore is in good shape. “US” is stamped at the breech. This example sports a solid stock despite the dents and dings from use. Here is a great example of early breech loading technology!