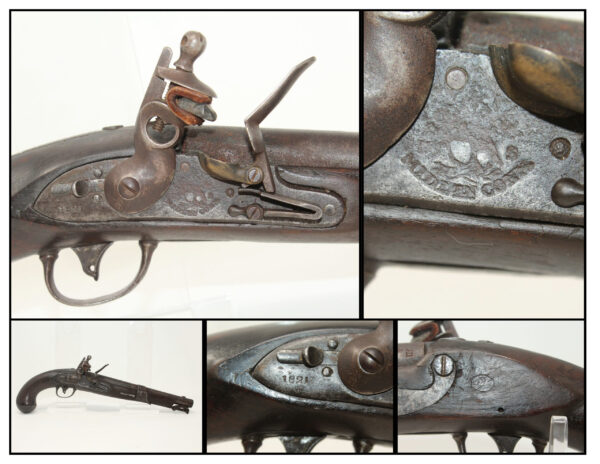 Here we present an antique U.S. 1819 Simeon North Flintlock Pistol, made circa 1821 in Middletown, Connecticut. This .54 caliber smoothbore flintlock U.S. Model 1819 pistol was made by Simeon North for a U.S. army contract. The U.S. Ordnance Department showed Simeon North a sample pair of pistols from the Harpers Ferry Armory on June 12, 1819. North then produced a pistol similar to that of Harpers Ferry with a few alterations. He signed a contract with the U.S. on July 21, 1819 producing 10,000 pistols. The complete production run had a total of 20,400 made. This pistol has a sliding safety bolt located at the rear of the lockplate that half cocks the hammer. The sliding safety bolt is rare for a pistol from this year. When these pistols were converted to percussion (unlike this one which has survived in its original flintlock state), this bolt was removed because it got caught on holsters. This pistol also introduced the iron swivel ramrod. It was created because wooden ramrods often fell out of the pistols and were lost. The front sight is a brass blade and the rear sight is oval on the tang.

Many were updated to the much more reliable percussion system in the 1830s. The service life was quite long for this pistol. The famous scout and Indian fighter Kit Carson fought with one of these, still in its original flintlock form, during the Mexican-American War from 1846-48. Even though percussion arms, including pistols, had been adopted by the U.S. in the 30s, it was not unusual for flintlocks to still be in use. Primary conflicts that would have involved this piece during its service life were the Seminole Wars, the Pawnee Expedition, the Mexican-American War and even the American Civil War.

The left stock flat bears the cartouched initials “LS” for inspector Luther Sage. The left side of the barrel is view and proof marked with the initials of Robert Johnson.

The overall condition is very good. The iron parts are dark with age. The markings are clear. The wooden stock is smooth and solid. The bore is dark and smooth. The action is excellent. These are quite scarce and highly desirable for their use early in 19th Century America and on the Frontier!