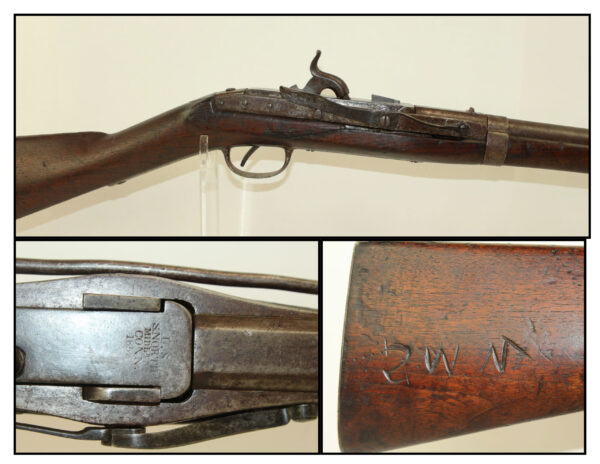 Here we present an antique U.S. Model 1843 Side Lever Breech Loading Carbine from the Simeon North Contract, made circa 1852 in Middletown, Connecticut. A native of Berlin, Connecticut, Simeon North was a successful manufacturer of scythes before he turned to gun making, eventually becoming one of the major suppliers of firearms to the United States military before the Civil War. In 1799, North secured his first contract with the army, who ordered 500 of his flintlock pistols; the next year the order was increased to 1500. Following the outbreak of the War of 1812, North expanded his plant in order to meet the government’s orders. He was the first to use the principle of interchangeable parts when he filled an order for 20,000 flintlock pistols.

This carbine was made in 1852 and would have been in use before and during the American Civil War. There is a bit of graffiti near the left toe of the stock.

The overall condition is good. The iron parts have a dark gray patina. The markings are clear. The walnut stock has an old crack, which is stable and has smooth worn edges. The bore is in good shape, dim yet with sharp rifling. The action is strong. Here is a great untouched example of a scarce contract carbine that has been there and done that!