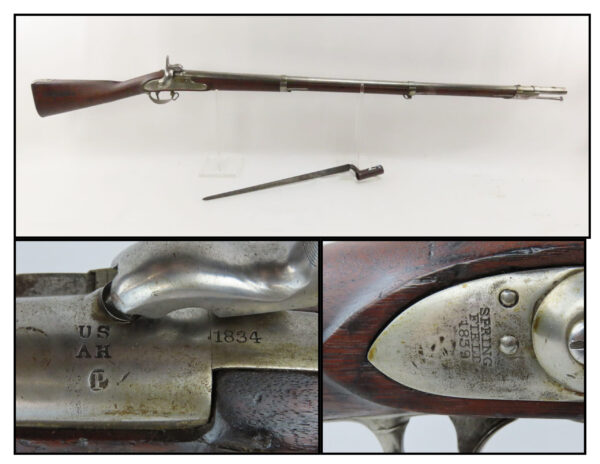 Here we present an antique Springfield US Model 1816 Musket with a “SIBERIA.” Marked Stock, manufactured at the armory at Springfield, Massachusetts, circa 1839. This Model 1816 flintlock musket has been converted to percussion using the Belgian Style Alteration method, more commonly known as the “Cone Type” conversion. All external lock parts were removed with the screw hole plugged, the pan ground flush with lock plate (leaving the remnants intact) and the small existing cavity in the pan filled with brass to give it a level or squared off profile along the top. The vent hole of the barrel was plugged with a nipple screwed into the threaded receptacle at the top of the barrel, set off center towards the lock side. Then, adding the distinctive arsenal, military hammer.

The War of 1812 revealed many weaknesses in American muskets. In an attempt to improve both the design and manufacture of the musket, the Model 1812 musket was created. The Model 1816 made further improvements, and replaced the Model 1812. Harpers Ferry became America’s second national armory after the site was personally selected by George Washington, with the Springfield Armory being the first. The U.S. Congress authorized the building of the new foundry in 1794, and by the following year, was producing hundreds of arms for the national army, which was primarily flintlock muskets and pistols. Inspired largely by the French Charleville Model 1777 musket, Harpers Ferry began producing the Model 1816. The M1816 was a smoothbore, muzzle loading weapon which used a .69 caliber musket ball. A trained shooter could fire between two and three rounds at a range of up to 200 yards per minute.

The M1816 was in production at Springfield (325,000) and Harpers Ferry (350,000) between 1816 to 1844 with around 675,000 muskets produced during this run. It saw service during the Mexican-American War and was even pressed into service during the Civil War in both the updated percussion and the old flintlock format. In the 1850’s, many 1816’s went through the conversion from flintlock to percussion.

This one is marked in large font on either side of the stock “SIBERIA.” It appears that the mark was not stamped but branded with a hot iron. This is a very intriguing marking, but we could find no official record of these going to Siberia. However, a couple of possibilities come to the fore: 1) that this was purchased on the surplus market and taken to Siberia by traders or 2) that this was a musket brought along to supply the Whites during the Bolshevic Revolution in 1919 when the American Expeditionary Force was fighting the Reds. This latter possibility may seem like a stretch but accounts tell that the Reds were still using muskets at this time and the US actually used obsolete muskets to arms other partisans through at least WWII (the Plymouth Navy Rifle was distributed to Pacific Islanders to help fight the Japanese during World War II)!

The overall condition is good. The action is as strong as ever! The bore is smooth and shiny. The markings are clear. The bayonet is in great shape. Here is a very nice M1816 musket with secrets yet to unlock!