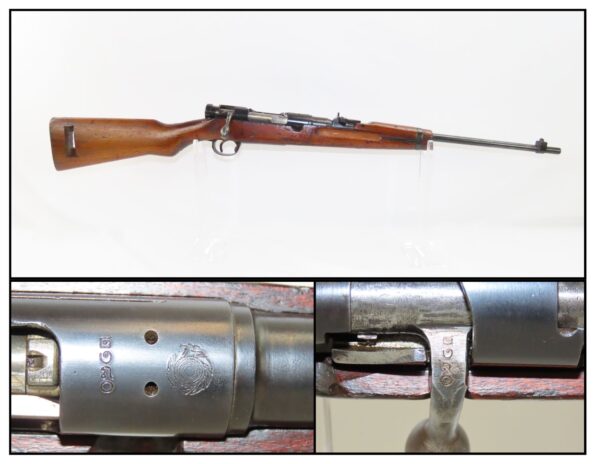 Here we present a Japanese Ariska Type 38 Infantry Carbine, made circa 1940 for the Japanese infantry soldier. The Type 38 carbine and rifle were bolt-action service rifles used by the Empire of Japan predominantly during the Second Sino-Japanese War and Second World War. The design was adopted by the Imperial Japanese Army in 1905 (the 38th year of the Meiji period, hence “Type 38”). Because the 6.5×50mmSR Arisaka cartridge it fired was considered underpowered, a replacement was devised, which was the Type 99 rifle, but both rifles saw usage until the end of the war. This design was the project of Major Nambu, famed and prolific firearms designer in Japan. The Type 38 has been called the best service rifle of WWII. The design was perfected with the advent of the Type 99, nevertheless, the Type 38 saw plenty of action during World War I and World War II.

Intended for use by cavalry, engineers, quartermasters and other non-frontline troops, the Type 38 carbine was introduced into service at the same time as the standard Type 38 rifle. The Type 38 carbine was produced at four different Japanese arsenals over the production run between 1906 through 1944. The Tokyo Arsenal, the Kokura Arsenal, the Nagoya Arsenal, and the Hoten/Mukden Arsenal. It’s no wonder over 500,000 were produced with this level of dedication for manufacturing.

This one was re-armored by the Siamese (Thai) government. In its new configuration it looks very much like an M1 Carbine, which was intentional. They could utilize the M1 Carbine oilers and slings that were being given as aid by the US after the war. It is very lightweight and trim. This is about as simple an arm as you can get, and it is still chambered for 6.5x50mm Japanese. Siamese markings were applied. This one has the bolt turned down. Many of these were used by police forces and some military units.

The overall condition is near fine. The action is strong with a smooth bolt pull. The metford style rifling is in great shape and the chrome-lined bore is bright. Both barrel and receiver have a nice blue finish. The wood remains solid. This is a really neat little carbine with the dual history of having been a WWII Japanese arm and later in the service of the Thai police!