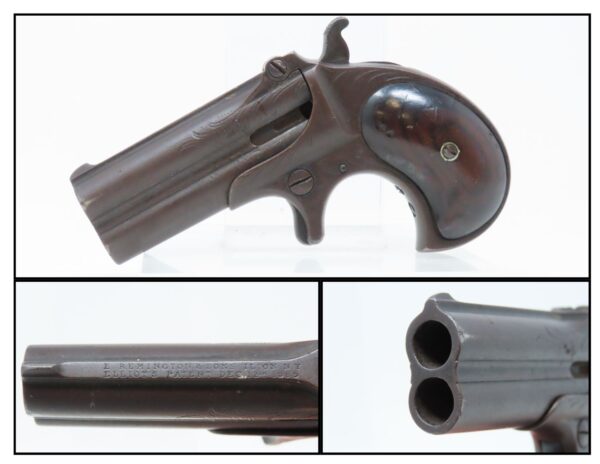 Here we present a Remington Type I 2nd Variant Double Deringer Over/Under pistol manufactured circa 1868 in Ilion, New York. Remington manufactured more than 150,000 of these over-under double-barreled deringers from 1866 until the end of their production in 1935, which is a testament to the design as well as Americans’ desire to carry a concealed weapon. The gun was made only in .41 Short rimfire. There are four models with several variations. The first model, first variation is only the first 100 made and were marked “MANUFACTURED BY E. REMINGTON & SONS” on one side rib, and “ELLIOTS PATENT DEC 12 1865” on the other side rib. These are very rare. The second variation is marked the same without the “manufactured by”. The third variation has an extractor on the left side and is referred to as an “extractor cut.” The fourth variation is marked, “REMINGTONS ILION NY” and is very rare.

The Deringer was sturdily built and simple in operation. A lever on the right side of the frame swings so that the barrels may open upward on a hinge for loading and unloading. There is a single firing pin that moves from one barrel to another with each cock.

The Remington Deringer has been made famous, especially in the old Western films, but use of these guns really was widespread. Lawmen and gangsters alike would carry them as backups or something to stick in a pocket. Civilians loved them, as well as those in the military. In fact, the NRA Museum has a specimen in their collection which was carried as a backup by a pilot during the Korean War in the 1950s.

The overall condition is good. Original patina. Good grips with an average amount of wear. Both bores are clear, but have dimmed. The action partially functions (missing extractor and the firing pin does not index). Lightly engraved frame and barrel. The markings are legible.