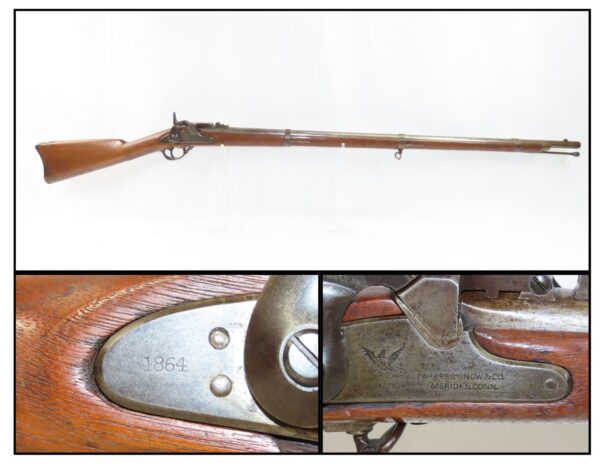 Here we present a Meriden Manufacturing Company Miller Conversion of a Model 1861 to a .58 Caliber Rimfire Breech Loading Rifle, made circa 1864 and converted circa 1865-67 in Meriden, Connecticut. Only about 2,000 are known to have been made. Production of the U.S. Model 1861/63 rifle musket was in excess of 1 million during the American Civil War between Springfield Armory, Harpers Ferry and about 20 different contractors. It represented a streamlined and, in some ways, technologically advanced musket capable of accurate fire when compared to previous generations of American muskets. Yet it was adopted during a period of rapid innovation that would make it obsolescent before the war drew to a close. Many conversions appeared toward the end seeking to take advantage of metallic cartridge technology for a faster rate of fire. Such examples were the Snider, Joslyn, Needham, Peabody, and the most successful, the Allin, and this was not even all of them. This conversion, undertaken by the Meriden Manufacturing Company of Connecticut, produced the “Miller Model 1861”. The conversion was named for the patent holders William H. and George W. Miller. In the system, a release catch found along the top of the barrel was used to brake the action open along a hinge, exposing the breech for inserting a cartridge. The patented arrangement was featured in Parkers, Snow & Company Model 1861 rifles.

The Parker Snow Contract Model 1861 was the chosen host for this conversion. The lock is stamped with a large spread-winged eagle over “U.S.” and marked “PARKERS’ SNOW & CO. / MERIDEN, CONN” in front of the hammer. This rifle being dated 1864 is believed to be the product of the James Mulholland Contract of 1861 of which only 5,502 were delivered. According to Flayderman’s Guide to Antique American Firearms, “it represents the first venture in firearms manufacturing by Charles Parker of Meriden, Connecticut. Originally a manufacturer of hardware, he soon, after the Civil War, in 1866-1867 formed what was to become the most famous of all-American shotgun Manufacturers, the famous “Parker Brothers”. These are known to have been issued to New York and Maryland militias after the war.

The overall condition is very good. Strong action. The bore is in good shape with nice rifling. Stock is solid with cartouche remnants on the left and a chip missing under the lock. Sharp markings. “1864” dated lock.