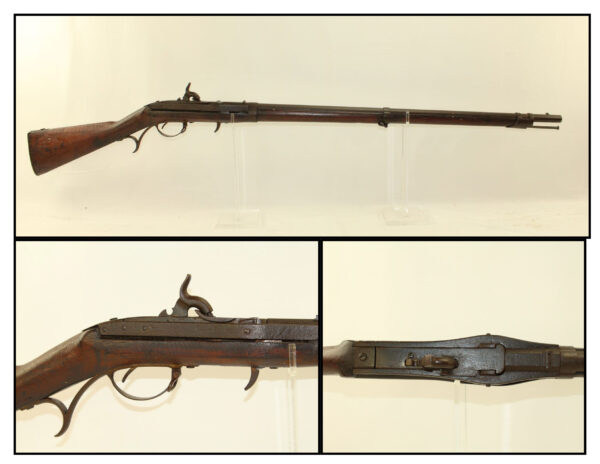 The M1819 Hall Rifle became the first breech loading rifle in the world to be adopted in significant quantities by a national army. In 1819, the United States Army formally adopted the Hall Rifle into inventory, superseding the Harpers Ferry Model 1803 flintlock line, with an order for 1,000 Hall Rifles, thus earning the designation of “Model 1819”. These guns were produced out of the Harpers Ferry Arsenal utilizing Hall’s assemble line methodology. As is this one, many Model 1819 muskets saw conversion to percussion in the lead into the Civil War, becoming the Model 1841 Hall Rifle. In total, 23,500 Model 1819 Hall Rifles were produced. Hall died long before the war on February 26, 1841, though not before leaving his imprint on firearms and mass production history.

One of the really interesting features of this rifle is the fact that the sights are canted to the left so as to navigate the sight picture around the somewhat intrusive hammer.

The overall condition is Good. All functions of the action are strong. The bore is dark with the lands and groves still sharp. The conversion was masterfully executed, leaving little traces of its original flintlock. This rifle is truly a testament to John Hall’s brilliance in breech loading technology. This is truly a great piece of US firearms history!