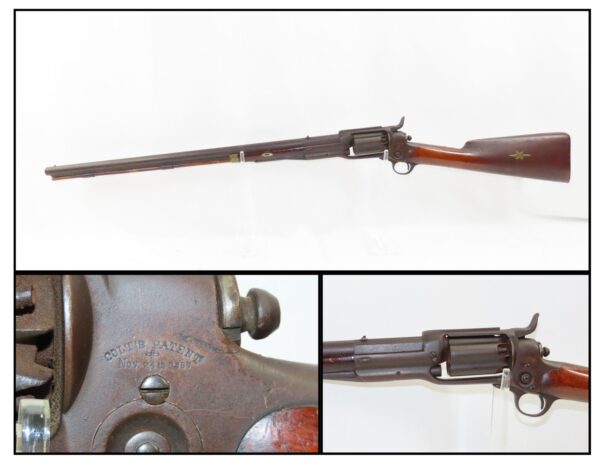 Here we present an antique Colt Model 1855 Half Stock Side Hammer Revolving Shotgun, manufactured circa 1861 with a production run of 1860 through 1863 in Hartford, Connecticut. Estimated production of the 20-gauge examples is 500 with a total production including the 10-gauge models of approximately 1,100. This revolving shotgun very much resembles the Model 1855 Half Stock Sporting Rifle. It came fitted with either a 27”, 30”, 33”, or 36” smoothbore barrel and had a 5-shot cylinder chambered in either .60 Caliber (20-gauge) or .75 Caliber (10 gauge). The hammer and loading lever were case colored with the rest of the metal blued. The stocks were either oil or varnish finished American Walnut. There was no rear sight and had a small trigger guard with the caliber stamped on it. Some have been discovered that had a large scroll trigger guard, though these would be considered extremely rare. These scarce shotguns have their own serial number range going from #1 through #1100.

These sidehammers also go by the nickname “Root” thanks to the involvement of Elisha K. Root, who was instrumental to the early success of the Colt Patent Firearms Manufacturing Company. These are classified by “The Book of Colt Firearms” as “the utmost rarity.”

This one features the shortest barrel length of 27”. Shotgun bead front sight. It has been equipped with a rear sight, though this was made less than useful by the piece of bar stock that was attached to the top of the frame so as to shore up the small gap that occurred. There is a small personal touch in the small medallion fastened onto the left side of the stock. This revolving long arm would have been intended for the field, for hunting. However, given its manufacture date, it is hard not to think that it would have made a very admirable weapon for a cavalryman before the advent of the Spencer or the Henry. A firearm such as this with 5 shots, even if the cylinder had to be turned manually (as this one now requires), would certainly have been preferable to the plethora of single shot, breech-loading carbines that were invented, purchased and issued during this period.

The overall condition is good+. Lovely original patina. The top strap separated at the front and a bar was installed to seal and strengthen the gap during the period of use. The action (hammer/trigger) are crisp and strong. The cylinder revolves intermittently and has to be indexed by hand for some of the chambers. Smooth bore, virtually untouched. Beautiful, solid walnut stock with some darkening. The three-digit serial number is stamped on the trigger guard tang. Markings are clear. This is a very clean, attic condition example of a very rare Colt revolving shotgun!