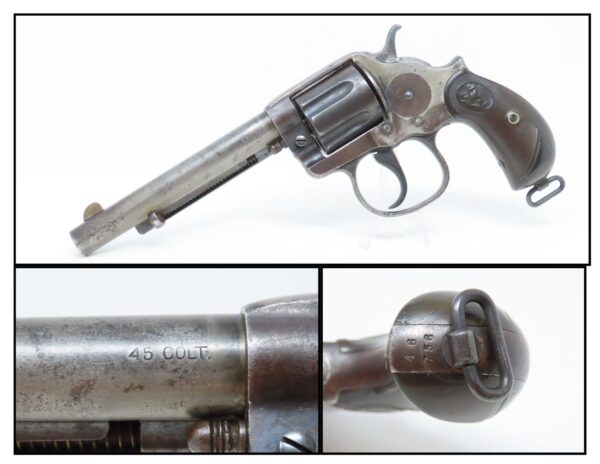 Here we present a U.S. Colt Model 1878/1902 Philippine Constabulary Double Action Revolver, made circa 1900 in Hartford, Connecticut. This Colt is one of approximately 4,600 revolvers purchased for issue to the Philippine Constabulary. It is a modified version of the Colt 1878 Double Action Army or Frontier model, which the US Army had tested in 1879 and rejected largely because of problems with light primer strikes. Many years later, experience in the Philippines would lead the government to seek .45 caliber revolvers for issue to the Philippine Constabulary, due to their reputation of putting an enemy combatant down harder than the .38s seemed to do. The Moros were tough jungle fighters who could get close and attack suddenly, much of the time with blades, and it is often said that the newer .38s just weren’t able to put a Moro out of action in time to spare the American GI serious injury or death himself.

Colt jumped at this opportunity by fitting a stronger hammer spring to the 1878 revolver and lengthening the trigger to give the shooter more leverage on the correspondingly heavier trigger. The trigger guard was also enlarged, as necessary to fit the lengthened trigger. The changes worked. The government purchased about 4,600 of the guns for use in the Philippines in 1902. While many assume that the .45 revolver acquired in response to the Moro fighters’ fighting spirit was the 1873 Single Action Army, it was actually the 1878/1902, though US Ordnance was also sending some of the SAA “Artillery” models (re-armored Colt Cavalry models with barrels shortened to 5-1/2 inches) to the Philippines at this time as well. The revolver was inspected by Rinaldo A. Carr and it is stamped R.A.C. Carr was an ordnance inspector for the U.S. Military between 1889 and 1909.

The right side of the frame is stamped “US” under the cylinder. Just above the grip on the right side, “ITT” and “1902” can be read. The numbers match. The left trigger guard is stamped with “R.A.C.” for Rinaldo A. Carr.

The overall condition is very good. The action is strong all around. The bore is bright in fine shape. All markings are sharp and clear. Both grips are firm with expected handling wear. This is a very nice example of a scarce US service revolver by Colt!