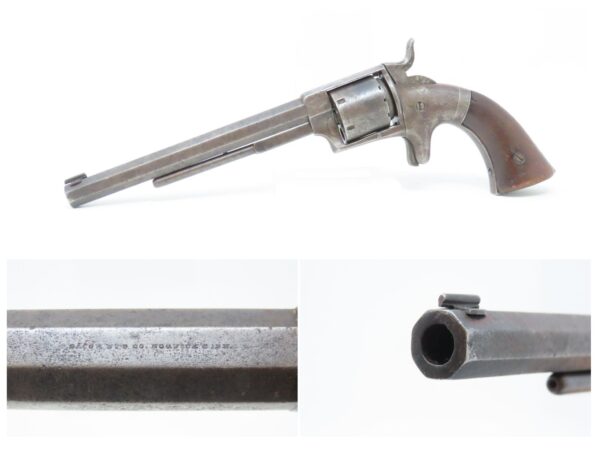 1 of 150 Manufactured Variant of the FIRST TYPE Revolver

Here we present a scarce antique Bacon Manufacturing Company Navy Model Variant of the First Type Revolver, made circa the early 1860s in Norwich, Connecticut. Only a total of 900 .38 rimfire Navy revolvers are estimated to have been manufactured by Bacon. Of the three variations, this is the earliest and is easily identified by the loading lever profile and the need to remove the cylinder for loading. It was manufactured pre-1862 given the lack of the Rollin White patent marking that was required after the loss of a lawsuit to Smith & Wesson and has scroll engraving on the rear section of the frame and a triangle pattern along the border at the junction with the grips.

The top of the barrel has the one line address and a dovetailed blade front sight. The rear sight is a groove in the top of the frame. It has a low number “52” serial number marked on the underside of the barrel. While no government contracts for these pistols are known, they are considered secondary martial pistols by collectors due to the likelihood that many were carried as privately purchased sidearms. They are considerably better suited for use as a sidearm than many of the other early metallic cartridge revolvers and fit the hand well. Had Smith & Wesson not cornered the market through their control of Rollin Whit’s patent, many more of these revolvers undoubtedly would have been manufactured and used during the Civil War.

Thomas K. Bacon was the founder of the company and was also involved with the Manhattan Fire Arms Co. as the superintendent. He also had business dealings with Ethan Allen and Allen & Thurber. When Manhattan moved their operation away from Norwich, Bacon left the company to stay behind and work on his own firearms manufacturing company. Part of Bacon’s contract with Manhattan included a “no-compete” clause that he would have been in violation of if the heads of Manhattan had bothered to sign the agreement. Nevertheless, they still took him to court with no official judgement recorded. Bacon’s arms were popular on the commercial market and many made their way onto Civil War battlefields upon being privately purchased by soldiers.

The overall condition is fair. Gray patina. The action (hammer/trigger) is functional though the cylinder lock up is not what it once was. The bore is good for age and black powder use. It has good rifling with some light pitting concentrated toward the middle. The grips are worn but solid. Front sight has been replaced.