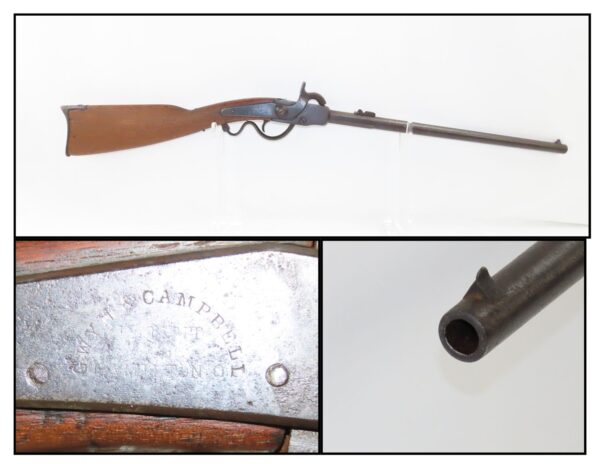 Here we present an antique Gwyn & Campbell Type I Saddle Ring Cavalry Carbine, made circa 1863 in Hamilton, Ohio, by Edward Gwyn and Abner C. Campbell. The American Civil War happened during a period of great firearms advancement throughout the world, but particularly in the United States. The primary transition was from muzzle-loaders to breech-loaders, from loose ball and powder to self-contained cartridges. Dozens of different small arms, namely cavalry carbines, were used in the conflict. The war saw obsolete technology fighting next to the cutting edge, and both sides needed it all. Imagine the logistical nightmare of supplying so many different types of ammunition!

Nevertheless, here we have one of the most recognizable Civil War carbines in the Gwyn & Campbell “Grapevine” Carbine. This was a single-shot, breech-loading percussion carbine that used a prepared linen cartridge consisting of the powder and bullet. The name “Grapevine” came about to describe the round and serpentine profile of the lever, differentiating it from other variants. This came after the Cosmopolitan Carbine, of the same basic design and made by the same company. Only 4,200 of the Type I and 4,000 of the Type II were produced, making these quite scarce for Civil War and military collectors. They are known to have been issued to the following cavalry units during the Civil War: 2nd and 3rd Arkansas; 5th, 6th and 16th Illinois; 3rd and 4th Indiana’s; 4th and 8th Iowa; 2nd, 6th and 14th Kansas; 10th, 12th, 14th and 40th Kentucky; 4th and 8th Missouri; 5th and 8th Ohio; 7th Tennessee; and the 3rd Wisconsin.

The overall condition is good. The action is strong. The bore has darkened. This example has a solid stock and 6 hash marks can bee seen on the left side. “GYWN & CAMPBELL” is engraved on the lock. Most of the metal parts have accumulated some level of pitting. The numbers match. Portions of the rear sight are long absent. A hard to find Gwyn & Campbell for your Civil War collection!