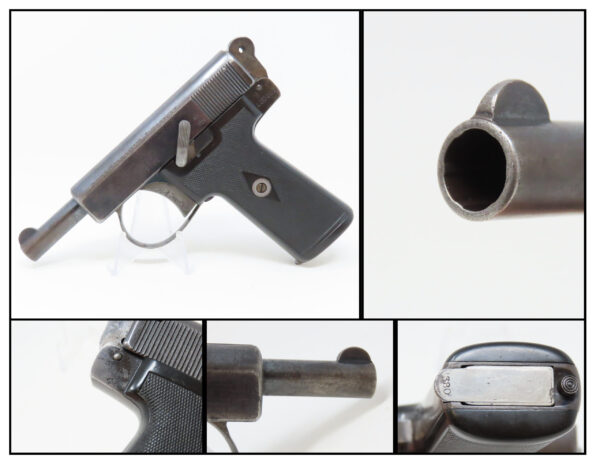 Here we present a Scarce British Webley & Scott .380 ACP Semi-Automatic Pistol made between 1910 and 1932 in Birmingham, England and shipped to John Little & Company Limited of Singapore. John Little & Company was a former chain of department stores in Singapore (then a British colony) that was established in 1845 until it was acquired by Robinson & Co. in 1955.

John Browning had introduced the .380 ACP cartridge in 1908 as a more powerful alternative to the .32 ACP, and Colt’s had begun chambering their Model 1903 design in the new cartridge, calling the new gun the Model 1908. The English firm of Kynock produced the .380 ACP cartridge for use in this Webley & Scott pistol, presumably beginning in 1909. The cartridge became known as the 9mm Browning Short in mainland Europe, but wasn’t introduced there until 1912, when the Model 1910 FN Browning was finally released.

The Webley & Scott .380 never sold well, and only 2,129 were ever made with production ending in 1932. If this pistol would have been produced for another 7 years when the people of Great Britain were facing impending invasion as the Battle of Britain was just beginning, things would have been different. Sales records show that all of Webley and Scott’s guns were being desperately snapped up by Brits ranging from the Ruling Class down to the everyday citizen. In a weapon starved Britain, even these little .380 semi-automatics would have been better than a frying pan against the greatly feared Nazi invasion.

Some of these pistols (maybe as many as 250) were used by the South Australian Police between 1913 & 1961 and were marked with the letters S A P over a broad arrow. Left hand side of the slide is marked “JOHN LITTLE & Co. LTD SINGAPORE”, and “WEBLEY & SCOTT LTD/LONDON & BIRMINGHAM/.380 AUTOMATIC PISTOL”.

The overall condition is very fine. Nice original blue. The action is robust. The bore is bright and in very good shape. Both grips are firmly seated and retain sharp checkering. All markings are clear. A very scarce piece from across the globe!