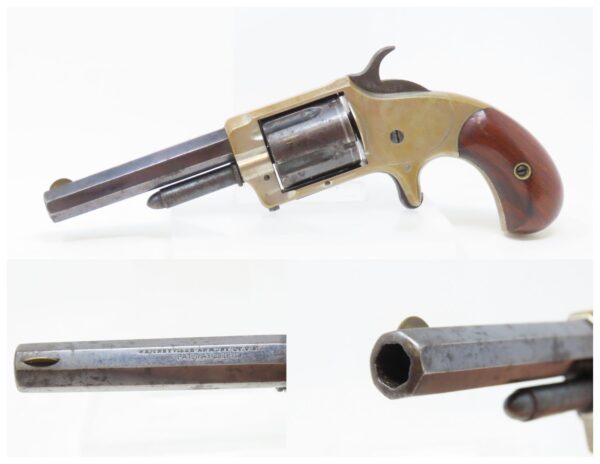 1 of Just 14,000 Manufactured at Whitneyville Armory

Here we present an antique Whitney Model No. 1-1/2 Revolver, made circa the 1870s in New Haven, Connecticut. Around 14,000 of these 5-shot revolvers are estimated to have been manufactured Eli Whitney Jr.’s Whitneyville Armory in the 1870s. This example has the standard “Whitneyville” markings.

Eli Whitney Sr. established his Whitneyville Armory in 1798 and produced firearms (among other things) by contract for the young U.S. government. Just prior to this, in 1793, Whitney invented the mechanical cotton gin, which dramatically changed the economic landscape in the U.S., namely in the South. While his invention was a labor-saving device, making the processing of harvested cotton extremely efficient and requiring fewer laborers, his machine caused the market for cotton to explode and more laborers were needed to plant, grow and harvest the crop. This resulted in a corresponding boom in the Southern slave trade. Great fortunes were created, and the population of the South became such that one in three Southerners were slaves. All this provided the fuel that would become the raze that was the American Civil War.

The overall condition is near fine. There is a nice original blue finish remaining on the barrel and cylinder, with a faded and thin silver finish on the brass frame. The action is excellent and lock up is great. The bore is in nice shape for age and black powder use with good rifling. The grips are in very good condition. This would have been a good competitor of similarly sized and chambered S&Ws and Colts in its day!