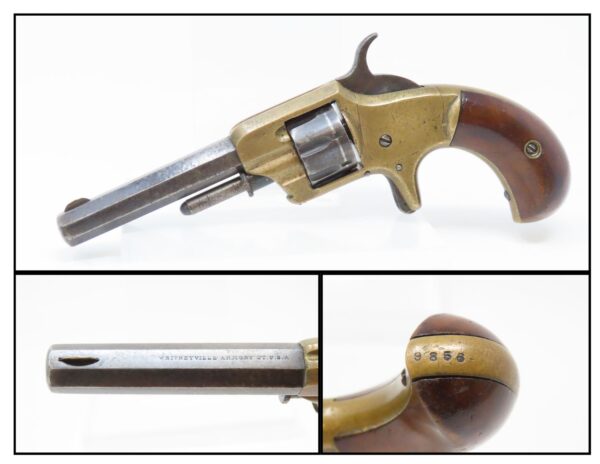 1 of Just 14,000 Manufactured at the Whitneyville Armory!

Here we present an antique Whitneyville Armory Spur Trigger Pocket Revolver, made circa 1871 through 1879 in New Haven, Connecticut. Around 14,000 of these 5-shot revolvers are estimated to have been manufactured Eli Whitney Jr.’s Whitneyville Armory in the 1870s. This little single action solid frame revolver was produced in the frame sizes, depending on the caliber. It was chambered in .22, .32, or .38 rimfire cartridges. They came with a brass frame with a variety of finishes including nickel plated, blued, or a combination of both. The “bird’s head” grips were normally rosewood or hard rubber, with some examples of ivory or pearl grips sometimes encountered.

Eli Whitney Sr. established his Whitneyville Armory in 1798 and produced firearms (among other things) by contract for the young U.S. government. Just prior to this, in 1793, Whitney invented the mechanical cotton gin, which dramatically changed the economic landscape in the U.S., namely in the South. While his invention was a labor-saving device, making the processing of harvested cotton extremely efficient and requiring fewer laborers, his machine caused the market for cotton to explode and more laborers were needed to plant, grow and harvest the crop. This resulted in a corresponding boom in the Southern slave trade. Great fortunes were created, and the population of the South became such that one in three Southerners were slaves. All this provided the fuel that would become the raze that was the American Civil War.

The overall condition is good. Excellent action. Good bore. Both grips are in good shape with below average wear. Numbers match. Here is a truly scarce piece of history for the collection!