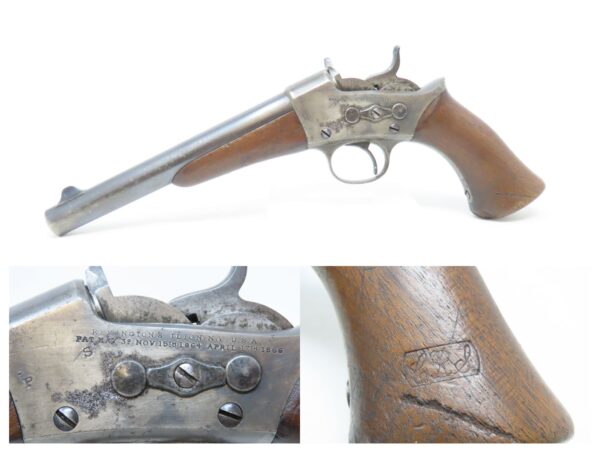 Here we present an antique Remington Model 1871 Army Rolling Block Pistol, (sometimes referred to as the Army and Navy Model), manufactured circa 1872-1888 in Ilion, New York. The rolling block design was an evolution of the split breech carbine design of Leonard Geiger. Geiger’s intent was to design an arm using a metallic cartridge that could be cheaply and easily manufactured for use during the American Civil War. Remington manufactured about 20,000 split breech carbines in three different rimfire calibers, but most were delivered too late to be used in the war. These pistols were a strange selection for a martial pistol given the prevalence of revolvers by this time and the obvious drawbacks of single shot weapons. Nonetheless, they are powerful sidearms and are incredibly reliable, just like the Remington rolling block rifles.

The Model 1871 was the final redesign of the original Rolling Block pistol, still operating on the big-bore, single shot premise. The trigger and trigger guard were moved forward on the receiver, and a spur was added to the receiver behind the hammer to allow for a better grip. A firing pin retractor was added, and a rotating extractor was designed.  The front sight was changed from a bead to a blade, and the lock work was also redesigned.  The gun was available in .50 centerfire, as is this one, but could be special ordered in .22 rimfire. It is estimated that just over 6,000 were manufactured.

The overall condition is fine. Original finish. Excellent action. Bright, sharply rifled bore. A legible cartouche remains on the left side of the grip. Sharp markings. Here is a very handsome and scarce U.S. martial pistol!