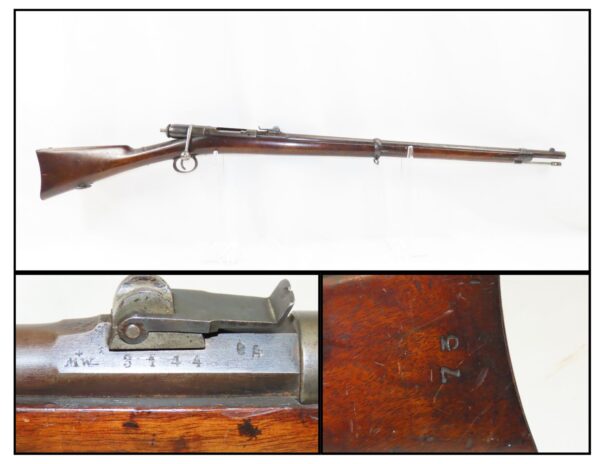 Here we present an antique Swiss Vetterli Model 1870 Bolt Action Single Shot Cadet Training Rifle, made circa 1870-73 at the Schweizerische Industrie Gesellschaft’s (SIG) armament factory in Neuhausen, Switzerland. This single shot cadet rifle was manufactured in a very limited number by SIG. It came with a one piece wooden stock and had no provision for a bayonet. In order to accommodate the smaller stature of the cadet, a reduced load round of the 10.4mm was produced which used 3 grams of black powder as compared to the standard load of 3.65 grams, thus reducing the recoil.

Introduced in 1867, the Vetterli rifle system utilized the “Winchester” tube magazine system for cartridge storage under the barrel. It was designed by Johann-Friedrich Vetterli (1822–1882), a Swiss rifle maker, who worked in France and England before becoming director of the Schweizerische Industrie Gesellschaft’s armament factory in Neuhausen, Switzerland where this rifle was built. The original 1867 model had an external hammer, like a Winchester, but in 1868 this was changed to an internal cocking bolt spring. In 1871 the Model 1869 was updated by removing the loading gate and magazine cutoff switch. This change was designated the Model 1869/71.

The Vetterli rifles were a series of Swiss army service rifles in use from 1869 to 1889, when they were replaced with the Schmidt-Rubin rifles. This type of bolt action was a major improvement over the simpler Dreyse and Chassepot bolt actions. The Vetterli was also the first repeating bolt-action rifle to feature a self-cocking action and a small caliber bore. Due to the Swiss Federal Council’s early 1866 decision to equip the army with a breechloading repeating rifle, the Vetterli rifles were, at the time of their introduction, the most advanced military rifles in Europe. The years leading up to the 20th Century were characterized by rapidly progressing small arms designs, especially those for bolt action rifles, but for a short period of time, the Vetterli could claim the title for most advanced. Modified Vetterlis were also used by the Italian Army.

The overall condition is very good. Original blue finish. Robust, smooth action. Bright bore. The stock is solid and stable. The numbers match on the barrel, sight, stock, and bolt! “73” is stamped on the left buttstock. A “star/U” can be seen on the right side of the barrel and “+/MW” on the left. “+P” is stamped on the rear sight. A wonderful piece of Swiss history for the collection!