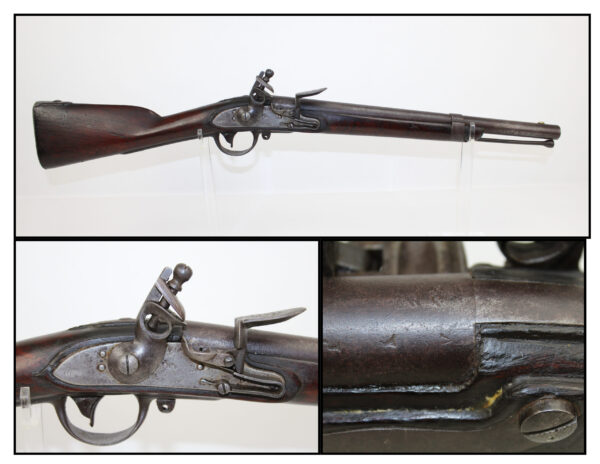 Shortened to Musketoon During Period of Use

Here we present an antique U.S. Springfield Model 1812 Flintlock Musket, manufactured in 1816 at the Springfield Armory. Only 30,000 were produced over about 3 years of manufacture. This model was born during the War of 1812 (1812-1815) and was based heavily off of the French Model 1777. The American design team tasked with improvements and other such subtleties was made of Peter Pelaux of Philadelphia and Marine T. Wickham, former master armorer at Harpers Ferry Armory, government inspector and contractor. It would not be long before the Model 1816 was adopted, however, limiting the number of these in existence along with attrition on the battlefield and on the frontier.

This Model 1812 is an example of a Type II. The barrel band spring is that little rectangular stud just forward of the band, unique to this type. This musket was shortened long ago, perhaps in service to a militia or perhaps once out of service, but this has every appearance of having been modified with the intention of making it handier from horseback. The barrel, once over 41 inches long, was cut to about 18-1/2 inches. A blade sight was added. The stock has also had some modest sculpting done around the metal parts such as lock, trigger guard, butt plate and tang. With a .69 caliber bore this could have been loaded with .69 caliber ball, shot or a combination of the two called buck and ball, making for a versatile and deadly weapon from horseback. This is a solid, rugged little package!

The overall condition is good. The metal surfaces are dark with age. The markings are clear and legible. The stock is in fair condition. The bore is dark. The action is functioning. These are very hard to find in any condition or configuration. Own one here that was obviously made more useful to someone by cutting it down for handy use off a horse!