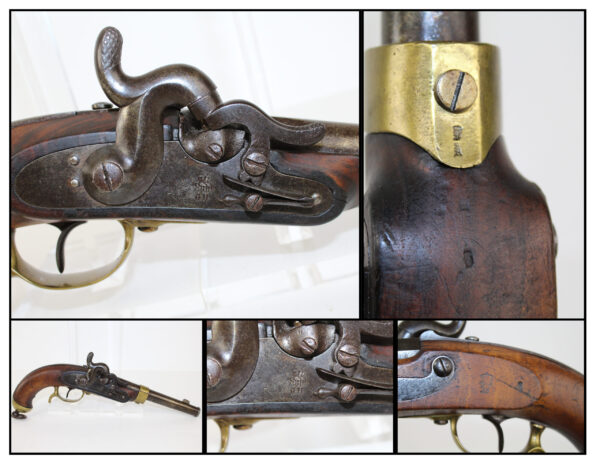 Here we present an antique Prussian Cavalry Model 1850 Percussion Pistol, made in 1863 in Suhl. This pistol was one of the longest used large, percussion horse pistols in Western Europe in the 19th Century. Several things made this pistol unique from others. The first was the spring-loaded protective cover of the percussion nipple. This acted as a safety as well as helped to retain the percussion cap and keeping away the elements. The second unique feature was the rounded rim at the muzzle which was aesthetically different, but may have been a design to prevent the deforming of the muzzle should it strike a hard object or be dropped on the battlefield. The sights are further developed with a sturdy pyramid in the front and a raised notch in the back. The pommel is equipped with a lanyard ring for retention. This pistol would have been tethered to the cavalryman and kept in pommel holster on the saddle. It saw action through the Franco-Prussian War in 1870, as well as the Second Schleswig War against the Danes in 1864 and the Austro-Prussian War in 1866. The Prussians were victorious in each conflict.

The overall condition is near fine. The metal surfaces are dark with age, appropriate for a pistol of the mid-19th Century. The markings are clear and legible. The smooth bore is clean. The stock is very good. The action on this pistol is excellent. Here is a fabulous piece of Prussian history!