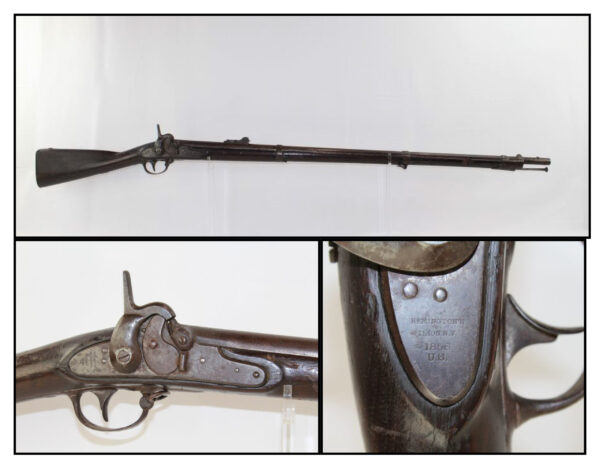 Here we present an antique Remington-Frankford Arsenal Maynard Primer Conversion of a U.S. Model 1816 Musket, performed by Frankford Arsenal in Philadelphia, Pennsylvania, circa 1857. The Model 1816 Flintlock Musket was the largest production of U.S. flintlock muskets, with over 700,000 made between Springfield and Harpers Ferry Armories, and many thousands more made by 16 different contractors. By the late 1850s, many of these arms were being updated using various percussion systems, most receiving the typical cap fired conversions. However, other conversions were also being tested, and Remington was contracted to make 20,000 Maynard Tape Priming locks in 1856. Instead of the small fulminate filled metal caps, Maynard Tape was a roll of paper that was impregnated in spots with fulminate. The primary advantage was that the soldier did not have to fumble with tiny caps, because a small wheel inside the lock dispensed primers from the paper roll. This was the system adopted for the Model 1855, and it made sense to update still serviceable flintlocks using this method. However, only about 20,000 of these conversions were done, and the U.S. government eventually chose to go with the cap system when they produced the Model 1861 and 1863 for service during the American Civil War. Most of these various conversions undoubtedly saw combat due to weapons shortages on both sides.

This musket puts you there and helps you understand a little better how the Civil War was fought. Many soldiers fought with decades old muskets that were converted from flintlock. Still, they were single shot weapons and when the fighting got close you parried sword blows with your musket and used it as a club. This musket demonstrates such use with a broad, clean cut between the front and middle barrel bands. This cut is nearly as old as the musket with no difference in the color of the wood and the rear part of the cut broken off and smoothed by use and the elements. Prior to the Civil War, however, this musket was first updated by Frankford Arsenal, where it received a new lock made by Remington, a new long-range folding-leaf rear sight. The lock is marked “REMINTON’S/ILION N.Y./1856/U.S.” and the barrel is dated “1857”. The barrel tang is marked “Z/A/87”, possibly Zouaves Company A Gun 87.

The overall condition is very good. The iron parts are dark with age. The markings are clear. The stock is in very good shape. The bore is smooth and dusty. The action is excellent. If you want a piece of Civil War history, this is it! A great example of a well-made flintlock musket that was updated in a neat way in limited numbers, in great condition with some battle scars to boot!