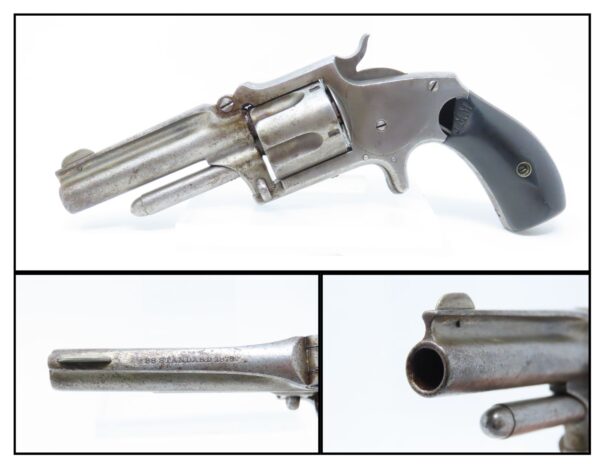 Here we present an antique Inscribed Marlin .38 Standard 1878 Spur Trigger Pocket Revolver, made circa 1880 in New Haven, Connecticut with a production run from 1878 through 1887 with a total of 9,000 being manufactured. This 1878 model is different than its Marlin predecessors. It features a steel frame and flat bottom butt, with hard rubber monogram grips with “JMM” imprints on the tops. It is chambered for a .38 centerfire cartridge. The revolver bears much resemblance to Smith & Wesson’s pioneer top-hinge cartridge revolvers. During a time when many, if not most people carried a firearm, these affordable little revolvers were small enough to conceal and carry, yet provide some level of protection or peace of mind, even when the town did not allow firearms within its limits.

It was not until 1948 that the term “Suicide Special” was coined and proliferated by Duncan McConnel in his article for the NRA’s American Rifleman. 10 years later in 1958 Donald Blake Webster published his book about them, Suicide Specials. There were quite literally dozens of companies making these at the end of the 19th century, curiously being “trade named” all sorts of things, for example: Defender, Blue Jacket, Red Jacket, Electric, Smoker and many more! They are typically rimfire and have the spur trigger, much like their progenitor the S&W No. 1 Revolver. Though they do not have the name recognition of Colt’s, Smith & Wesson and Remington, they still represent a period in American history and present an opportunity for collectors with relatively minimal investment.

Though this beautiful spur trigger was made 15 years after the close of the Civil War, handguns like this were commonly privately purchased by soldiers for use on the battlefield. Whether legend or fact, it is interesting to note something commonly read about pocket revolvers of the day: that while they could be used for self-defense against the enemy, many soldiers kept them on their person to defend themselves against an unwanted amputation in the primitive field hospitals that were notorious, even in their day.

The overall condition is good. Strong, tight action. Dark, good bore. The grips have seen better days, but remain firmly seated. Visible numbers match. A heavy layer of cosmoline can be found in the cylinders and bore. Here is a truly scarce example that’s a must have for the collection.