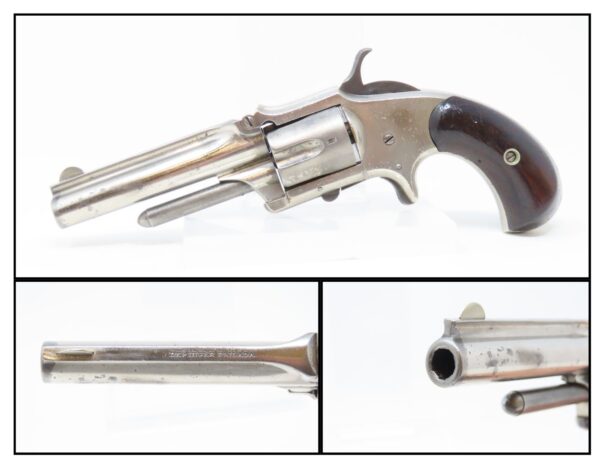 Made by Henry Deringer’s Great Grandson with ROSEWOOD GRIPS!

Here we present an antique Henry Deringer .32 Rimfire Pocket Revolver, made circa 1873-79 by I.J. Clark in Philadelphia, Pennsylvania. Henry Deringer is perhaps one of the most recognized name in firearms history, so much so that his name became a noun in the English language, still in use today. He was known for his handsome design for single-shot percussion pistols made in Philadelphia and used all over the U.S. beginning in the 1830s and through his death in 1868. His design was much copied and his name used on these copies without his permission to increase sales.

Unsurprisingly, after his death, things were no different. His family continued to use his name and his great grandson, I. Jones Clark, produced a series of pocket-sized, spur trigger revolvers that were all the rage with the close of Smith & Wesson’s monopoly on the market due to the expiration of the Rollin White patent. In fact, these revolvers were very well-made copies of S&W’s seminal rimfire revolvers, with the primary difference being the sturdier barrel latch at the bottom of the frame. These are certainly extremely well made and very collectible. Only 6,900 estimated to have been made.

The overall condition is very good. Strong, tight action. Bright bore. Both grips are firm with an expected amount of wear. Numbers match. Here is a truly scarce, interesting collection piece, for the collection!