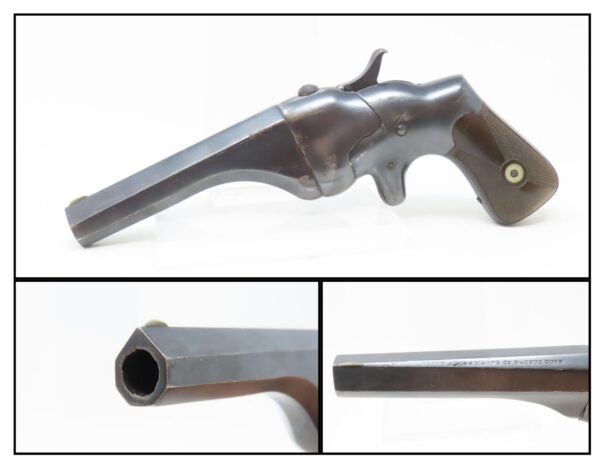 Here we present an antique Connecticut Arms & Manufacturing Co. Hammond Patent Single Shot Deringer, made circa the late 1860s in Naubuc, Connecticut. Also known as the “Bulldog” this Hammond Patent, single shot, pivot breech pistol was one of less than 8000 manufactured between 1866 and the late 1880s.

The Hammond brothers, Henry and Lewis, began their gun making venture during the American Civil War in 1863. They tried for several years before they were granted a patent for this same breech-loading design found on this pistol, but they also made a longarm that was similar in function. By the time their patent and production were under way, the Civil War had reached its end and a glut of firearms on the market stymied many companies. As a result, production numbers of this pistol were quite small, and these are quite unique and desirable today.

The overall condition is very good. Virtually complete blue finish as it was refinished at some point. Strong action. The bore is extremely bright. Nice grips. Here is a fantastic and scarce example of a unique bulldog pistol.