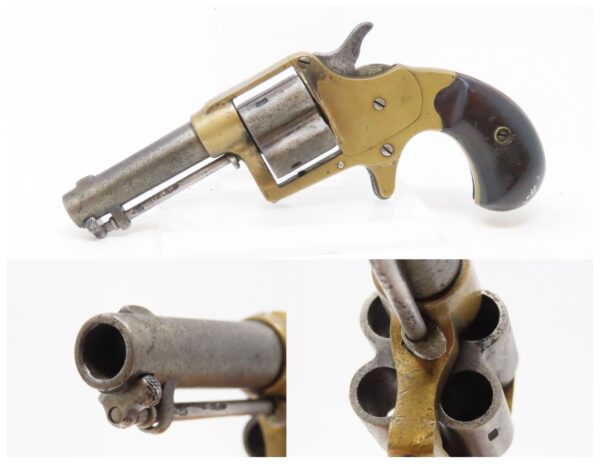 Here we present an antique Colt Cloverleaf House Revolver, made in 1871 in Hartford, Connecticut. Only about 7,500 of these unique revolvers were made, with only about 5,300 of them with the distinctive 4-shot, “cloverleaf” cylinder. It was chambered for the .41 Rimfire, a relatively large cartridge for the size of pistol. It was intended for self-defense and succeeded. They were marketed as being good guns for home protection, hence the moniker “House Revolver”. This model Colt was made most infamous in the shooting death of Gilded Age Robber Baron “Jubilee” Jim Fisk. Here’s more on that story;

Fisk was a big man with a big name in the stock brokerage game in New York City, sometimes called “Jubilee Jim”. Even from a young age he was a consummate entrepreneur, quitting school and becoming a traveling salesman with his father at only age 12. He made his fortune selling textiles during the American Civil War and became a stockbroker, investor and railroad man. He was one of three men who forced Cornelius Vanderbilt out of his controlling interest in the Erie Railroad, and was in bed with Boss Tweed of Tammany Hall. He was married, but became fixated on Josie Mansfield as his mistress. It was the foundation of many similar tales that would be told after. He put her up, paid her rent, and bought her expensive things. Needless to say, they provided much gossip in Victorian New York City. Much more can be read about this confounded series of events, but for the sake of brevity, Fisk’s very good friend and abusive business partner, Edward Stokes, began an affair with Josie, which caused a fallout between Fisk and the other two. Meanwhile, desperate for money, Stokes and Josie attempted to blackmail Fisk with damaging letters he had written to Josie. Fisk stubbornly went to the police and charged the two with blackmail. Upon hearing of this, Stokes was ready to kill Fisk. He ambushed him on the stairs of the Grand Central Hotel and shot him twice with a Colt Cloverleaf Revolver, killing the 36-year-old Robber Baron, but not before Stokes was captured and identified by Fisk as the killer.

The overall condition is good. Patina throughout. The action is excellent. The bore is in good condition for age with strong rifling. The numbers match. The grips are worn though still solid.