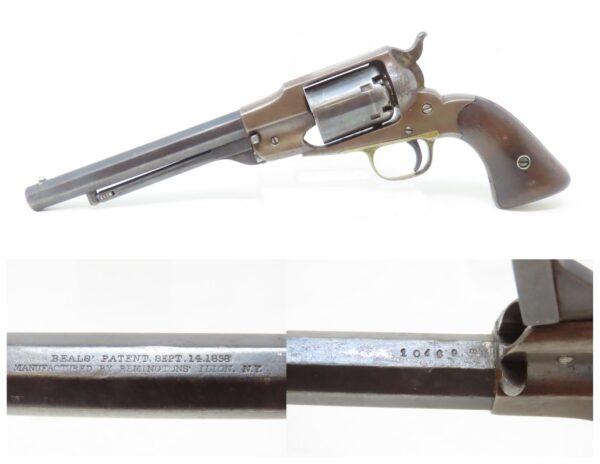 Here we present an antique Remington-Beals Navy percussion revolver, manufactured circa 1861-1862 at the Remington Armory in Ilion, New York. The Remington-Beals model revolvers were percussion revolvers manufactured by Eliphalet Remington & Sons in three different calibers, those being the .31 caliber Pocket, the .36 caliber Navy, and the .44 caliber Army, used during the American Civil War, and was the beginning of a successful line of medium and large frame pistols.

Fordyce Beals (1807-1870) was a firearms engineer who worked both for the Whitneyville Armory and then the Remington Armory in the mid-1850s. During his time at Remington, he developed the Remington-Beals six shot, single action, Army revolver which appeared in 1861. It was prominent as a revolver that saw service with both sides of the American Civil War. This gun’s design is typical of the period. The grip is integral and covered in wood for comfort, and the solid frame added robustness to the design.

The Remington revolver was a secondary, supplemental issue firearm for the Union Army until the Colt factory fire of 1864, when it became the primary. Due to the fire, the Colt 1860 Army was not available for some time. Subsequently, large numbers of the Remington revolver were ordered by the U.S. government. It was more expensive than the Colt, but those who could afford it remarked on its durability.

The overall condition is good. This one was subtly customized during the period of use to have the grip contoured from at the bottom at both the toe and heel, providing a round, smoother grip that may have been better for smaller hands. This work was done carefully and only a few file marks remain. This revolver wears an old refinish. The action remains strong and the cylinder indexes but does not lockup. The bore is dim with strong rifling. The grips are smooth and solid. Numbers match.