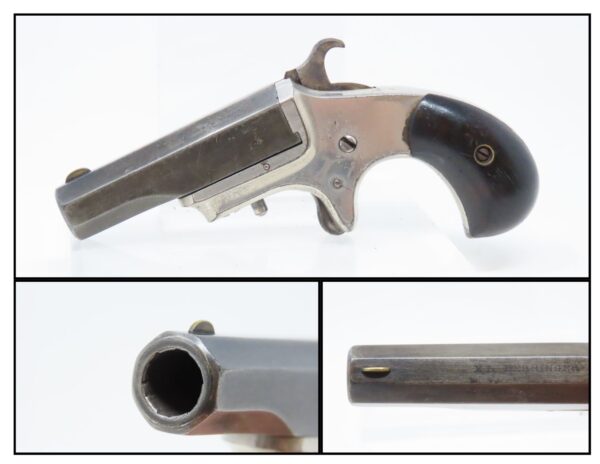 Here we present an antique Hopkins & Allen XL Spur Trigger Derringer chambered in .41 Caliber Rimfire, made in Norwich, Connecticut circa 1875 with a production run between 1870 and 1879 with total production numbers being less than 2,000. The 2-1/2 inch barrel is marked on the top “XL Derringer” and “Pat. Apr 5. 1870”. This nifty little pistol utilizes a fixed blade front sight, spur trigger and nickel plating. To load, the hammer is brought back to half-cock, the barrel release button on the bottom of the frame is pressed and the barrel will then pivot exposing the breech for loading a single cartridge. Once loaded, the barrel is swung back into firing position, the hammer pulled to full-cock and the trigger pulled to fire.

Hopkins & Allen Manufacturing Company was a major manufacturer of rifles, shotguns, and inexpensive cartridge handguns between 1868 and 1915. After an initial investment of $2000, H & A began operations as a producer of firearms, machinery, tools, and hardware. After the expiration of the Rollin White Patent in 1869, they began converting their percussion revolvers to accept cartridge ammunition. In addition, they started producing a line of spur-trigger cartridge revolvers in .22 and .32 calibers. From its humble beginnings, Hopkins and Allen had grown from a small shop with 30 employees to become a major producer of firearms and an employer of 600 workers. In a state known for firearm production, H & A ranked third only behind Colt and Winchester. Hopkins & Allen continued to manufacture a variety of revolvers and small arms until 1915.

The overall condition is very good. Original nickel and blued finish. Excellent action. Both rosewood grips are in good shape. The bore is in good shape for its age. A really nice and handsome little Derringer pistol from Hopkins & Allen!