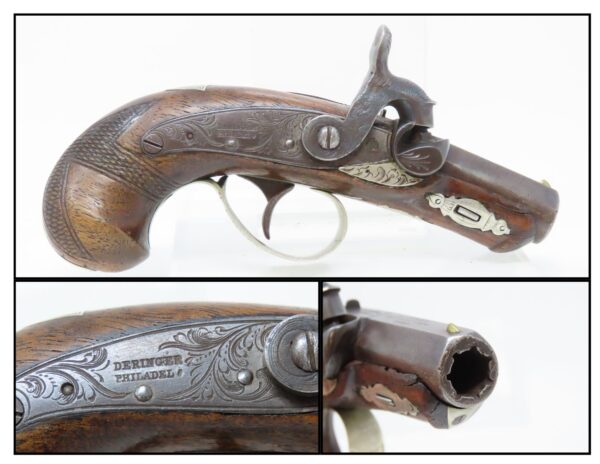 Here we present an antique Henry Deringer Percussion Pistol, made circa 1856-63 in Philadelphia, Pennsylvania. It is marked on the barrel with retailer Charles Curry of San Francisco. In 1863, Nathaniel and John Curry inherited their brother Charles’s business upon his death and began marking their pistols “N. Curry & Bro/San Franco Cala”, placing this example with a production date of circa pre-1863. Curry was a large distributor of legitimate “Deringers” and a former citizen of Philadelphia as well.

Henry Deringer was a very successful Pennsylvanian gunsmith who started his own company in his early twenties, circa 1809. It was not until the 1850s that his prototypical “Deringer” percussion pistol became extremely popular. Once it did become popular, the basic design was copied in dozens of different shops. Not only was it copied, but Deringer’s good name was stamped on guns made by others, many of them not up to the quality standards of Deringer himself. The inventor was apparently very worried about protecting his good name, so he pursued and sued any of the counterfeiters that he could find and tried to warn the buying public to beware of his spurious imitators.

The name “Deringer” often invokes certain historical events, characters or moments in film. Deringer’s name has become both a noun and a catch-all term. President Abraham Lincoln was shot and killed with one of Henry Deringer’s pocket sized percussion pistols, the night John Wilkes Booth revenged the South at the Ford Theater. They conjure images of the California Gold Rush, as well as riverboat gamblers. These pistols were very practical for the time, being small and concealable and of large bore size. Charles Edward Chapel had this to say about the Deringer, especially regarding their use in San Francisco during the gold-mining rush in the 1850s and the decade following:

The overall condition is very good. Strong, tight action. Nice bore. The stock is solid, though it shows use and has a split on either side of the fore stock. The hammer was cracked and repaired long ago. You can just see the slight indentation on the back of the hammer that does conform to the usual profile. Sharp scroll engravings on most metal parts. German silver décor. This is a neat little Deringer from San Francisco that has clearly been used!