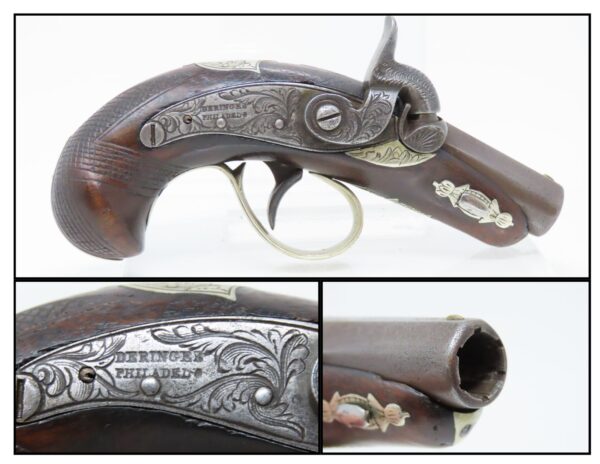 Here we present an antique Slotter & Company A. J. Plate Deringer Percussion Pistol, made circa 1858-60. Herman Adolph Joseph Plate was San Francisco’s most famous 19th Century arms dealer and secured his place in history when he lost a patent infringement lawsuit over the infamous Deringer pistol.

Henry Deringer founded his company in 1806 and invented what would become one of history’s most famous pistols. The Deringer was popular because it was lightweight and compact. To compensate for its single-shot capacity, users often carried a pair that sold for around $25 total, including a custom calibrated bullet mold. But, Henry Deringer neglected to patent his gun and before long there were copycats.  While some imitators produced percussion pistols that were similar, one company, Slotter & Co., started by former Deringer employees, scrupulously copied every detail, including the A.J. Plate private label stamping that was made for Plate’s first purchase of 54 pairs of the Deringer pistol in 1858.  Around 1860 Plate purchased an additional 428 pairs, most of which bore the Slotter’s A.J. Plate label.

The overall condition is near fine. The action functions well, though the mainspring has lost a little tension. Engravings remain sharp. Very nice bore. Solid stock. A gorgeous example of a rare and storied pistol!