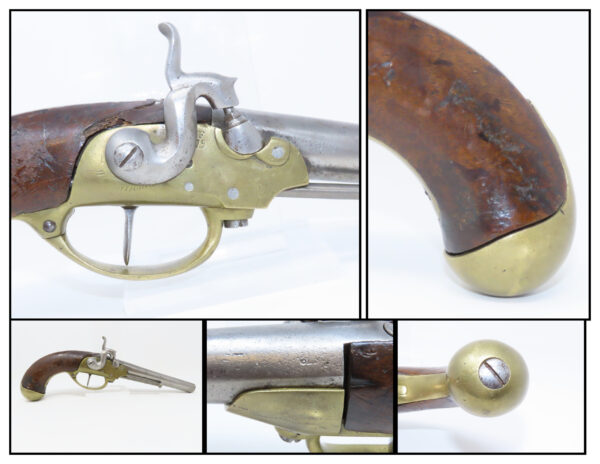 Here we present an antique French Charleville Model 1777 Percussion Conversion Pistol, made at the armory at Charleville circa 1779. The Model 1777 is historically significant to the American Revolutionary War, as the French recognized the United States of America’s independence and sovereignty in 1778 and declared war on Britain as the fledgling nation’s ally. The French had begun sending arms and supplies in 1775, but secretly. With their new alliance, France provided the U.S. with loans, arms and even troops to fight on U.S. soil. Predecessor to the North & Cheney 1799 pistol, many French 1777 pistols came over from Europe during the American Revolutionary War, both with French troops and as part of the military aid supplied to the Revolution.

After the American Revolution, the first U.S. martial pistol made and officially adopted in America was the incredibly scarce Model 1799, made by Simeon North & Elisha Cheney. The Model 1799 was patterned very closely to the Model 1777, with only a few changes. Only 2,000 1799s were made, making them incredibly rare and very expensive, valued in the tens of thousands.

Finally, the Model 1777 is also historically significant to the French. At the time of this particular pistol’s making, in 1785, King Louis XVI was on the throne. In 1789, the French Revolution began and chaos ensued for the next 10 years, characterized by insurrections, mob violence, execution and assassination. King Louis XVI was executed in 1793. Simultaneously, France was at war with much of Europe. Eventually, Napoleon Bonaparte rose out of the ranks through coup and became emperor.

This is one of the very few examples we have seen of one of these flintlock pistols converted to the percussion firing system, which was done circa the 1840s—this as a result of the mentality that nothing still useful gets wasted. The lock reads “CHARLEVILLE” and has “F/79” stamped just in front of the hammer as well as “79” stamped on the left side of the barrel—these dates of acceptance from 1779, which places this squarely inside the confines of the American Revolutionary War years of 1775-1783.

The overall condition is good. The action is very strong. The bore is good. The stock is solid and stable regardless of the crack behind the breech. Whether you are a Franco-file, an American Patriot or want to own the pistol that the Model 1799 was designed upon, look no further. Here is an astounding amount of history in a small package.